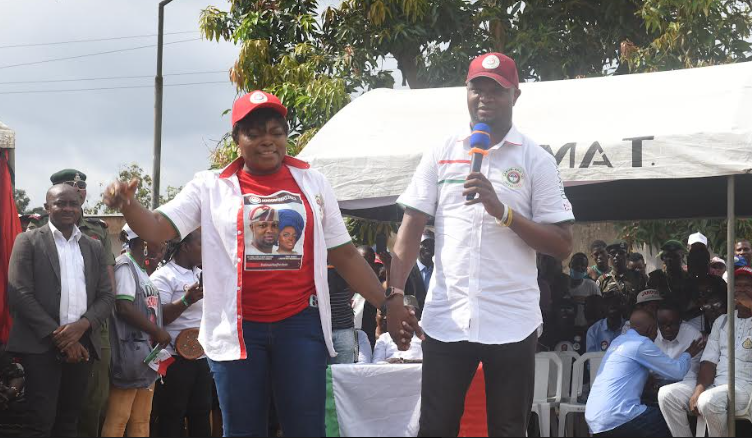 A former member of the Board of Trustees (BOT) of the Peoples Democratic Party (PDP), Aduke Maina, at a campaign rally in Somolu, stated that the PDP governorship candidate for the 2023 elections, Dr. Abdul-Azeez Adediran, has great plans for residents of the state and a greater Lagos. He, therefore, enjoined  residents to vote massively for Jandor and all the PDP candidates in the general elections in February and March 2023.

Maina, joining  Adediran and Funke Akindele campaign train on tour of the 12 wards in Somolu Local Government, said that the PDP candidate would not lie to them with his campaign promises.

He said that Adediran had shown commitment and determination to rescue the masses and alleviate the suffering and hardship facing them.

“Relax your mind. I do not tell you lies, our governorship candidate is not lying either. PDP is for you and your interest.

“We know what you need and we will do them. What we need are your votes and those of your relatives.

Mrs. Josephine Shontan of the Folashade Olukoya Foundation Widows’ Forum, who spoke on behalf of widows, said that the state was in dire need of a deliverer.

“We need a governor that will help us in Lagos as widows. We are widows and we do not have anyone to help us.

“When you win and become governor, don’t forget us,” Shontan pleaded.

Adediran  assured the people that all his promises were given on his integrity, adding that he had no intention to scam the residents.

“I won’t lie to you. I have not told you lies. I will make a difference and make Lagos work for all, including you.

“All residents and community of people will be considered important and will be listened to. We want to run a people-oriented government you all will be proud of.

“I won’t promise what I will not do. All I have said are on my integrity. I am determined to bring in breath of fresh air in Lagos. Relax your mind, God sees your heart desires and God will fulfil your desires.

“All of you will enjoy my government. God has blessed Lagos State so much to create happiness for all residents. We shall create opportunities for your children to spread the wealth,” he said.

Adediran said that he deliberately chose a woman as a deputy to keep women and children matters on the front burner in his administration.

He said that his administration would not tolerate abuse of children and women, stressing that violence against them would be met with stiff penalties.

Adediran promised sustainable empowerment for the youths and women through creation of enabling environment.

He said his government would not share noodles as empowerment but would give residents financial support to do business and monitor their progress to ensure they expand and employ others.

According to him, his government will also ensure free and compulsory education with free school uniforms.

Adediran said the Feb. 25 presidential elections remains the most important, hence, the need for the people to vote for the PDP candidate, Atiku Abubakar.

He urged the people not to be deceived to vote along ethnic or religious lines, stressing that being related by blood does not guarantee help to anyone.

He said that if Abubakar wins, other state elections would be easy for the party to win.

Adediran met with various groups and associations in the council to seek support.

APC battles Kaita over allegation of diverting N1.1bn for campaign by Katsina govt