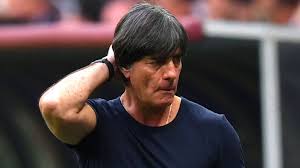 The German postmortem of the shambolic World Cup display continues as Joachim Low takes responsibility for the failure and looks to the future.
After conquering the world in 2014, expectations were high for a German team that returned a solid core of players from the winning roster. Unfortunately, complacency, an inability to adapt and turmoil within the squad quashed dreams of repeating before the tournament really got going. Losses to Mexico and South Korea along with a narrow victory over Sweden left the mighty Germans disappointed, heading home early with their tail between their legs. Most managers would resign or quickly be dismissed, but the success under Die Mannschaft manager Joachim Low was not forgotten. In a grueling 110-minute press conference Low opened up on his team’s group stage exit at the 2018 World Cup.
Raphael Honigstein highlighted the key moments from the manager’s “ mea culpa ” including an admission of his own personal failings, defensive instability and his thoughts on the future.
The German boss in an honest, albeit delayed, account of events asserted that he underestimated Germany’s group stage opponents.
My biggest mistake was to almost arrogantly believe that we could get through the group stage with our dominant possession game and then adjust for the knock-outs. I wanted to perfect our possession play, I carried it too far. We lost the happy medium that we had in 2014. His desire to perfect Germany’s possession play sacrificed an invaluable piece of the puzzle—defense.
As Low explained with the help of a rather austere PowerPoint presentation, Germany’s possession game had been too slow, static and too dangerous, in terms of lacking defensive balance…Low felt that a slightly more flexible approach, the ability to relinquish the ball without relinquishing control, offered a better way forward for his team. Playing with only two central players in front of a back four with two high full-backs, none of whom were defensive specialists, looks positively foolish in that light now. Oddly, he claimed, “possession football taken to such risky extremes would be better suited to ‘long run’ league competitions.” His arrogance coupled with a risky style left Mats Hummels, Jerome Boateng, and Niklas Sule flailing like fish out of water as their opponents counter-attacked in an instant.
This is a sight all too familiar to Bayern Munich fans as these three have been hung out to dry in key matches for the last five seasons. Like Germany, the Die Roten defenders have lacked the necessary support since the Treble winning campaign and the 2014 World Cup run. The likes of Sami Kedhira and Toni Kroos, as well as Javi Martinez and Arturo Vidal have failed to provide the necessary cover in crunch time.
Regardless of the quality of Hummels, Boateng and Sule, being outnumbered to the degree they have been consistently puts them in a position to fail .