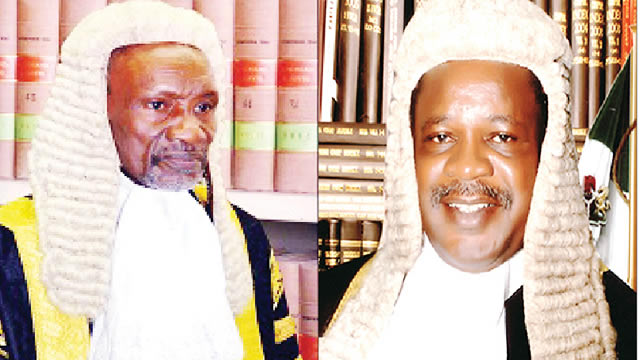 The National Judicial Council (NJC) in its 78th meeting, under the leadership of its Chairman Chief Justice of Nigeria Mahmud Mohammed, recommended justices Mohammed Ladan Tsamiya and Innocent Umezulike for compulsory retirement on Friday.

The NJC also dismissed Justice Kabiru Auta and stated that he be handed over to the Assistant Inspector-General of Police in Kano State for prosecution.

The NJC said that Mr. Umezulike, Enugu’s chief justice, was  sacked for  accepting N10 million in gifts from individuals on whose case he sat, and for  making dishonourable remarks as senior judicial officer, and for abusing his judicial powers in several cases.

: “There have been many instances of abuse of judicial powers by [Mr. Umezulike], particularly against the two defendants in Suits Nos. E/6/2013 and E/88/2016.  The Chief Judge clung to these two suits to remain in his Court, despite all genuine efforts made by the defendants to get the suits transferred to another Court,” a press release by the NJC stated.

ALSO SEE: Another justice steps down from Kanu’s trial

Auta’s crimes include accepting N125 million from a petitioner in a case he was adjudicating, He also accepted N75 million naira through his personal assistant, facilitating communications between a petitioner under his review and the former Chief Justice of Nigeria, and numerous other offences.

Tsamiya, the Presiding Justice of the Court of Appeal in Kwara State,  he was guilty of demanding N200 million to influence an appeal case, and other abuses of his office.

Recently, the EFCC and Prsident Muhammadu Buhari complained of how Nigeria’s judiciary is frustrating the federal government campaign against corruption.

The EFCC has investigated a number of lawyers, mostly SANs, and judges, including Auta, for bribery.

Forget Biafra as Buhari may hand over to Igbo, says VON director-general.