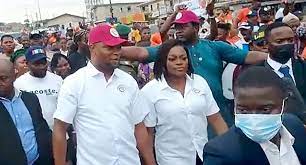 The Lagos PDP Gubernatorial Candidate, Dr Abdul-Azeez Adediran, says everybody and all communities will feel the touch of government if he is elected in the forthcoming general elections.

Adediran, in company with his running mate, Ms Funke Akindele, and party leaders made the pledge during their campaign tour of the 19 wards in Ikorodu Local Government.

The candidate and his deputy on Oct. 19, 2022 embarked on a tour of the 245 wards in the state for stakeholders’ engagement in each council.

The governorship hopeful, in interactive sessions on Wednesday with various stakeholders in ward C1, C2, C3, C4, D1, D2, B1, B2 and A3, said that every resident of the state would be considered very important.

He promised that his administration would embark on free education with free school uniforms from primary to secondary level, infrastructural renewal, massive empowerment of youths and women.

According to him, his administration plans to also create a ministry for People Living with Disability as well as a ministry to take care of children, women and vulnerable in the state.

“I will create a ministry that will take care of children in Lagos State for the first time and deal with all cases of domestic violence. We shall also give special empowerment to women.

“We are coming to run a masses-friendly government and I will decentralise the logistics and ensure everybody and community is considered relevant,” he said

Adediran said that his administration would treat every resident of the state equally.

“We would set up empowerment centers across the state for women and people who are unemployed; through this, we can fight poverty.

“My government will introduce free and compulsory education in Lagos State to address the challenge of over two million out-of- school children in Lagos State.

“When we resume, we can see how many of them we can take out of the streets and engage the private schools to take them while we provide them (schools) tax subsidy.

“The ones we will put in our schools, we will give them free uniforms which will be sewn by our tailors in each of the communities in every area,” he said.

Adediran added that he would set up technology innovation hubs in each of the five divisions in the state where youths would be trained and empowered.

Earlier, one of the residents, Joseph Nwankwo, complained about the lack of government presence in several communities in the council.

He advised Adediran to fulfil his promises if elected.

“Most of our men do not have jobs; we do not get empowerment opportunities and other benefits given to other people. Don’t disappoint us when you are elected,” Nwankwo said.

Meanwhile, the campaign train paid a courtesy call on the Baale of Elepe in Ward C2, who in turn prayed for the candidates, appealing to them to have the fear of God in mind if elected.

Zimbabwean hospitalised after fighting off leopard