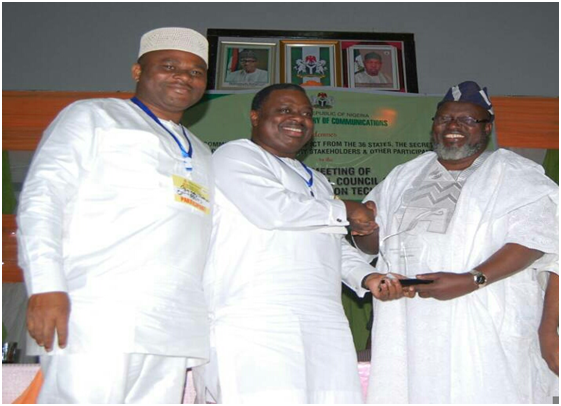 Share this on WhatsApp
Spread the love
Lagos State Government beats 35 other States of the Federation to emerge the best performing State in ICT Development and also best State in E-Government Implementation in Nigeria.
Lagos also bagged top awards as the Best State in ICT Infrastructure Development, while it also emerged first runner up in the category for Best State in Human Capital Development.
The Awards were presented at the 5th Regular meeting of the National Council on Communication Technology (NCCT 2017) organised by the Federal Ministry of Communications, which took place in Katsina State, last weekend.
In a statement on Tuesday, the State’s Commissioner for Science and Technology, Mr. Olufemi Odubiyi, who received the awards alongside the Permanent Secretary in the Ministry, Mr. Olukayode Ogunnubi, said the awards confirmed the State Government’s commitment to ICT development in Lagos.
ALSO SEE: NCC to review year of the consumer campaign
He said that Governor Akinwunmi Ambode, since assumption of office on May 29, 2015, prioritised ICT development in the State, adding that it has since improved service delivery in major ministries in the State and was transforming Lagos to a digital village.He said the NCCT, which was chaired by the Hon. Minster for Communications, Mr. Adebayo Shittu, gave States the opportunity to showcase ICT activities in their various States, particularly success stories in their application of ICTs in solving governance and development issues.
Odubiyi said the Minister for Communications expressed delight at the committed efforts of the Lagos State Government to the development of ICT not only in the State but in Nigeria as a whole.
According to him, the Minister expressed the Federal Government’s readiness to partner with Lagos State to achieve the nation’s vision of rapid transition to a functional digital society as envisioned by Governor Ambode.
The Minister for Communications presented the awards to Lagos State and a goodwill message to the Government and people of the State.
The NCCT meeting which was hosted by the Governor of Katsina State, Rt. Hon. Aminu Masari at the State Government Secretariat, Katsina, had the theme: “Harnessing ICT As The Main Tool For Driving The Economic Recovery And Growth Plan (ERGP]”.
Share this on WhatsApp
Related Topics:E-Government ImplementationInformation and Communications Technology (ICT)Lagos State Government
Up Next