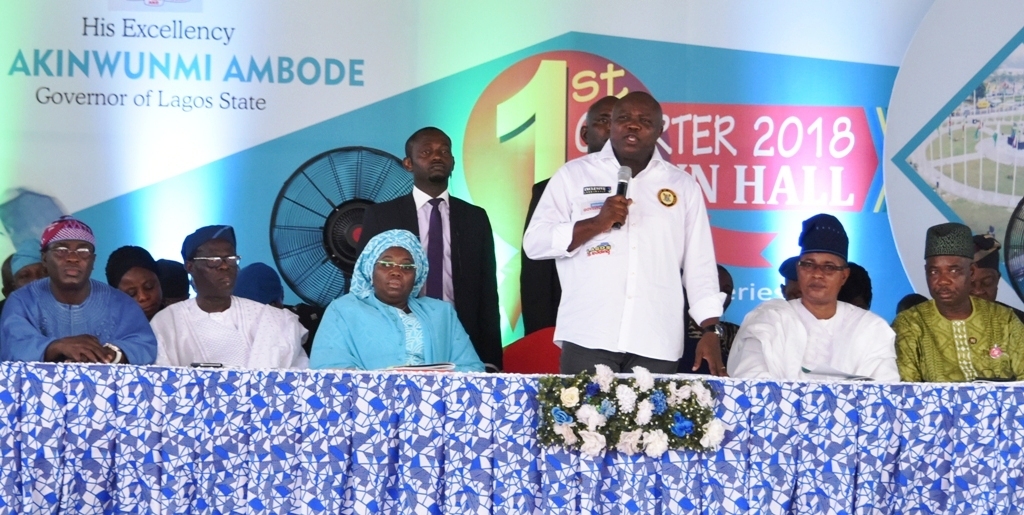 Share this on WhatsApp
Spread the love
Lagos State Governor, Akinwunmi Ambode, on Thursday, commended residents of the State for supporting his administration to deliver on key projects in various sectors and sections, revealing that the State generated a total of N503.7 billion revenue in 2017 despite the harsh economic climate in the country.
Governor Ambode, who spoke at the first quarter Town Hall Meeting in 2018, the 10th in the series since his assumption of office, held at De Blue Roof, LTV Complex in Agidingbi, Ikeja, said while the State was entering into the new year with confidence of being on a solid prosperity footing and interesting prospects for all Lagosians, it was indeed gratifying that the support of the people enabled government to achieve a lot and commenced the transformation of the landscape of the State.
He said: “As we celebrate entering a new year, we thank you all for your support and cooperation last year. It was your backing that enabled us to achieve the modest successes we recorded last year and commence the transformation of the landscape of our State. In the last year, we delivered on our promises to Lagosians despite the harsh economic climate.
“Despite the harsh economy, our State budget performed at 82 per cent. Total Revenue Generated was N503.7 billion, representing a performance of 78 per cent; Total Recurrent Expenditure was N281.33 billion, representing a performance of 92 per cent, while Total Capital Expenditure was N387.60 billion or 76 per cent performance.”
The Governor listed some of the key projects delivered last year to include the new Tafawa Balewa Square Bus Terminal, new Ojota Pedestrian bridge, Aboru – Abesan link Bridge and adjoining inner roads, Ojodu Berger Slip Road and Pedestrian Bridge, Jubilee Bridges in Ajah and Abule Egba, Freedom and Admiralty Road in Lekki, new Lands Registry, newly upgraded Jubilee Chalet in Epe, among others.
In addition, Governor Ambode said as at December 2017, the Lagos State Employment Trust Fund (ETF) had disbursed a total of N4.5 billion to 5,500 beneficiaries who also received training on financial literacy and business management, while keys were presented to beneficiaries of the first set of allottees of Lagos State Rent-To-Own Housing Scheme, as well as creation of Neighbourhood Safety Corps and beautification of the State with the erection of monuments, parks and gardens.
Giving a report of activities of his administration in the last quarter in line with tradition of the meeting, Governor Ambode said between the period under review, the State Government commissioned the first State-owned DNA Forensic Centre in Nigeria and West Africa, and in the coming weeks would sign a contract to upgrade the facility to offer toxicology services, which will make it the first in Sub-Saharan Africa.
“In fulfillment of our promise to our students in tertiary institutions across the State, this administration disbursed a total sum of N635.5 million to 8,419 students across the State.
Our government acquired healthcare equipment worth N2.5 billion. The equipment will strengthen the capacity of our health facilities to render improved health services and also facilitate smooth take off of the Lagos State Health Scheme which is designed to enable residents enjoy unfettered access to qualitative healthcare.
“Since the last Town Hall meeting, we have continued the renovation and upgrade of our Primary Healthcare Centres (PHCs) and our people at the grassroots have started to witness a revitalized healthcare delivery. In order to meet the needs of the youth in the area of technical and vocational development, we have approved the establishment of three other Technical Colleges bringing the number of Technical colleges in the State to eight,” he said.
While reeling out the outlook for the year, Governor Ambode assured that he would sustain the momentum of development and vigorously pursue all on-going projects, with special focus on health and education.
ALSO SEE: Buhari to meet with stakeholders over herdsmen/farmers clash
Already, in the 2018 Appropriation Bill of N1.046 trillion budget size awaiting approval of the House of Assembly, the State Government has earmarked N92.676 billion for health representing 8.86 per cent and N126.302 billion for education representing 12.07 per cent of the budget. 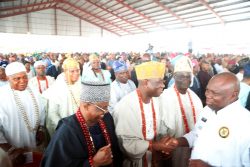 He assured that the State Government in the coming weeks would pay compensation to all those whose structures gave way for construction of the 1.4 kilometre Pen Cinema Flyover/Bridge, as well as those in Igbogbo, Ikorodu, Owutu and other areas where construction activities are ongoing.
The Governor, who also entertained questions from residents, ordered the Public Works Corporation to immediately move in to fix bad roads in Computer Village, Abesan Estate, Oriade, Abule Egba, among others, while the office of the Special Adviser on Primary Health Care was directed to make the PHC in Resettlement Area of Eti-Osa functional in two weeks.
While also revealing that the Market Development Board would be inaugurated in coming weeks, the Governor expressed optimism that when functional, the board would address issues of market relocation for developmental projects, just as he said that the Onikan Stadium will be ready in January 2019.
Besides, Governor Ambode urged all taxpayers to be alive to their responsibility of fulfilling their obligations to the State, saying regular payment of taxes remained the major source of funding infrastructures, and assured that the government on its part would judiciously utilize the taxes to make life comfortable for the people.
“I urge all taxpayers to be alive to their responsibility of fulfilling their obligations to the State.  Regular payment of taxes remains the major source of funding the infrastructure being put in place to ease transportation, provide security build new roads and refurbish existing ones,” the Governor said.
Responding to a question from a resident on efforts made to forestall any invasion by herdsmen, Governor Ambode allayed fears, saying that the State Government had taken precautionary measures to ensure safety of lives and property of residents.
“We have already prayed at the beginning of this year, herdsmen would not be our portion, but after prayer, we will work. So, all the issues that you have raised, I am not taking them for granted, I will look at them and also make sure that all our security agencies are on alert and up to date to mitigate any action or intrusion that may arise from that particular quarters,” he said.
Share this on WhatsApp
Related Topics:2017 budgetAkinwunmi AmbodeLagos State Governorown Hall Meeting
Up Next