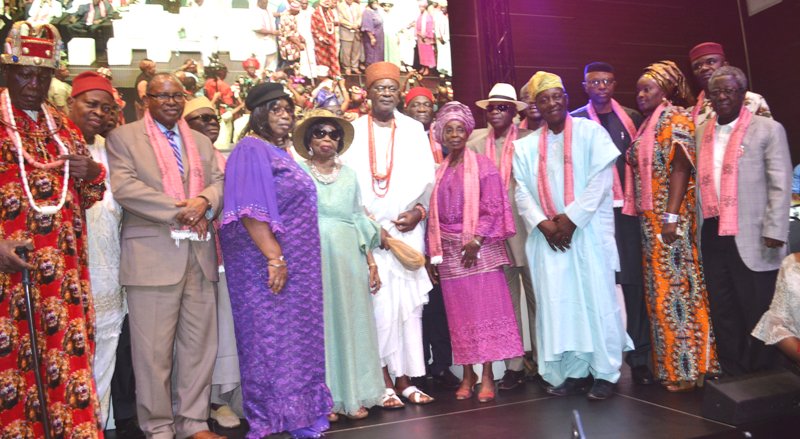 Share this on WhatsApp
Spread the love
Leaders of the South east, South West, South-South and the Middle Belt met in Enugu, Enugu State, where they signed an accord on building a new power bloc from the Benue into the lower Niger.
The leaders in a communique signed by Chief Nnia Nwodo, President-General, Ohaneze Ndigbo and ‎Chief Ayo Adebanjo, on behalf of Afenifere, came up with a 17-point resolution on consolidating handshake across the Niger.
Details of the Communique captioned “Handshake Across The Niger” are given below:
A] Notations
After today’s meeting of all strata of persons of Igbo and Yoruba origins in Enugu, the erstwhile capital of Eastern Nigeria, the conferees comprising leaders of the South West (SW), South East (SE), the South South (SS) the Middle Belt (MB) made several observations and resolved as follows:
1. Noted the immense strength of Igbo-Yoruba close affinities of kinship and brotherhood, shared origins and cultural/ethical values, a common world view and inherent love of freedom and justice;
2. Noted that the Hand Shake Across the Niger (HSAN), anchored on the heroism of Major General J.T.U. Aguiyi Ironsi and Lt. Col. Adekunle Fajuyi, though long overdue, has finally burst the myth of Igbo-Yoruba irreconcilable differences and spiteful rivalry, thus, providing new impetus for resurgence of the same bold, patriotic and nationalist solidarity of the two ethnic groups from the 1930s to the 1950s that earned independence for Nigeria in 1960;
3. Noted that in a long history of close relations and association, the Igbo and Yoruba have no recorded instances of violence against each other’s ethnic group, such as inter-ethnic mass killings and destruction and/or seizure of property; that instead, they have lived, worked and prospered together, accommodating and respecting their differences;
ALSO SEE: Olubadan throne tussle: Court fixes Feb. 12 for hearing
4. Expressed awareness that grievances generated by past errors on both sides can no longer justify or sustain dissention between the two groups whose solidarity and mutual collaboration have the capacity to dramatically change the fortunes of Nigeria, thereby also, changing the fates of the African continent and the black race;
5. Noted that the HS has brought about a new dawn of irreversible amity in the horizon of Igbo-Yoruba relations, that they have today declared time-up for, and permanently buried, the hatchet of distrust and spiteful rivalry, leading to a credible tipping-point of optimism and opportunity in realizing the destiny of Nigeria as a start-up nation-state that can achieve great things.
B] Decisions and CommitmentsIn consequence of the fore-going, the conferees of the HS arrived at the following decisions and commitments:
1. Decided to collaborate closely to create mutually beneficial opportunities, build a strong alliance to advance their ever growing mutual interests, while striving together to meet the common responsibilities of building a united, coherent and prosperous nation – state of free peoples, freely relating to one another across the dividing lines of tribe, religion, region and politics;
2. Declared unflinching support for a truly federal union of Nigeria that is democratic, stable, secure, peaceful, just and fair to all its citizens.
3. Committed to work in close partnership and through peaceful means to restructure Nigeria, reducing and restricting the duties of the federal government to only matters of national import on the exclusive list, while granting the federating units the right to take full responsibility for local, developmental and residual matters, as this will lead to healthy competition and cooperation among the federating units, in place of the present dysfunctional arrangement that merely superintends over the sharing and consuming of rents, and holds some States and Zones down for others to play the elusive game of catch-up;
4. Committed to insistence therefore, on peaceful devolution of powers, fiscal federalism, land/resource ownership/control, reforming component structural and systemic institutions to radically reduce the escalating cost of governance;
5. Committed to working tirelessly towards joining the economically-performing nations – China, India, Brazil, Israel, Singapore , South Korea, Malaysia and Thailand etc. – not as a dependent State, but a competitive producer and exporter of knowledge-based goods and services;
6. Committed to immediate implementation of pro federalism recommendations of the 2014 National Conference, in particular those affecting the efficiency of governance.
C] The way forwardWe believe that the fore-going measures will reposition Nigeria to reach credible nationhood, attain its full potential and respect in the community of nations thereby enabling us to effectively lead the campaign for the political and economic renaissance of Africa and the black race – the very goals for which the Zik of Africa and the sage Chief Awolowo and a host of other founding nationalists lived and sacrificed so much. The conferees of the HS have therefore:
i] Decided that today’s Hand Shake (HS) is not a one off event, but only the first of a progressive and continuous re-socialization project that will, in short order, reach out to embrace other compatriots in the South South (SS) , Middle Belt [MB], North Central (NC) North East (NE) and North West (NW) zones of the country;
ii] Decided therefore, to establish a standing Joint Action Committee to drive this process, and to continually articulate fresh ideas and strategies to sustain the current zeal and momentum of mutual understanding and collaborative actions aimed at resuscitating Nigeria politically and economically in order to position her to earn her rightful place among the contending nations in the world.
The composition and mandate of the Joint Committee and its sub-committees, along with the full report of today’s Hand Shake, will be posted in due course.
Share this on WhatsApp
Related Topics:Reviving Igbo -Yoruba brotherhoodSouth WestSouth-East
Up Next