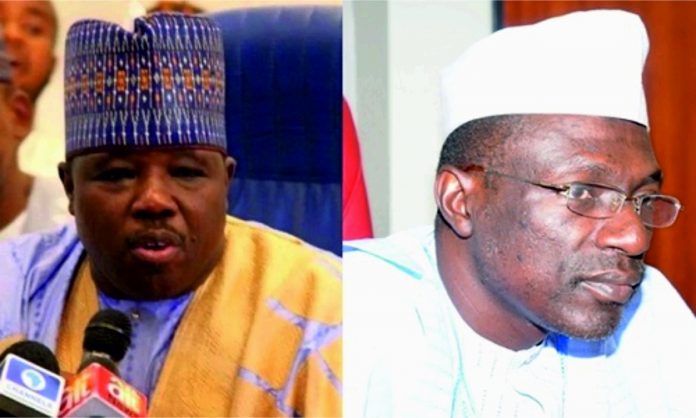 Share this on WhatsApp
Spread the love
The battle for the leadership of the Peoples Democratic Party (PDP) is currently generating big drama at the Supreme Court, Abuja. The appeal by the Makarfi faction of the PDP which comes up today at the supreme court in Asokoro, Abuja, is beclouded with arguments over who is the authentic interim Chairman of the leading  opposition political party between Senator Ahmed Makarfi and Senator Ali Modu Sheriff. National Daily reports that proceedings on the suit was going on at the time of this report.
The case has been mentioned and counsels to both parties are arguing for a convenient date for adjournment to allow the lawyers of Sheriff, Olujimi SAN, and Makarfi, Wole Olanikpekun, to prepare their briefs for the substantive hearing of the suit.
ALSO SEE: Jonathan-PDP peace process collapses
While the Sheriff faction is asking for 30th of May, Makarfi’s lawyers are asking for 25th which the Supreme Court had earlier suggested, pending the agreement of both parties.
After much arguments, the Supreme Court Justice held that the applicants are given seven days to file a written address and the respondents were given five days to respond. The Court, thereafter, adjourned all other issues regarding this motion to 25th of May, 2017.
The Court of Appeal, sitting in Port Harcourt, Rivers State, had in its judgment, upheld Sherriff as the interim national chairman of the PDP which led to the appeal by Makarfi and his followers to the Supreme Court.
Share this on WhatsApp