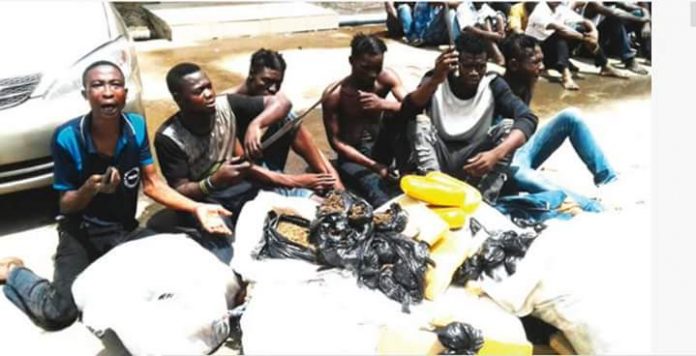 The rising illicit drug trade in Lagos metropolis, especially marijuana, and the inability of relevant anti-drugs agencies to apprehend some dealers or mop up the substance is defiling solution as some market women have been figured to conceal such drugs in food stuff as bait from the preying of security agencies National Daily can authoritatively reveal.

Facts emerged during last month’s clash at Mushin when several bags were confiscated after the dust from the clash had settled.

Investigation uncovered that market women operating in shops assist the peddlers to stockpile Indian hemp under bags of Gari, Beans and other food stuffs unknown to the preying eyes of anti-drug agencies.

A source told National Daily that “major dealers of the substance keep and preserve large quantity of weeds in the shops in order not to be detected by security operatives during raids.

A police source revealed to National Daily, how they acted on a tip off through whistle blowers recently and raided several shops at Idioro market and discovered large number of bags containing Indian hemps. 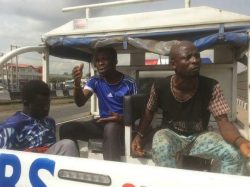 According to him aside the hard drugs discovered; some other dangerous arms and ammunition were also found in the shops.

The discovery prompted the operatives in the state acting on special directive from the Commissioner of Police to raid suspected criminal hideout within Mushin and environs which led to the arrest of no fewer than 69 suspected armed robbers including 15 drug dealers.

National Daily’s finding to uncover why illicit drug trade still boom across Lagos State metropolis like in Oshodi, Obalende, Ikota village, Ajegunle, Mushin, “Bowler” in Lekki along Epe expressway, and so many other hotspots in the state revealed the hidden secret of how drug sellers move cannabis without being caught.

It was also gathered that despite continuous raid of major black spots by operatives of the National Drug Law Enforcement Agency (NDLEA), the Police and other security agencies, not too much recovery have been made as these market stalls are hardly searched as they are least expected to drug dome. 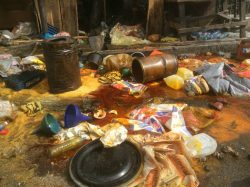 National Daily recalls that hell was let loose last Monday, 24 April, 2017, at Mushin, a Lagos suburb, when youths engaged in free for all fight leading to setting ablaze of houses, shops where food items are sold while four people were killed and over 30 people arrested by the police.

Idi-Oro, Mushin was thrown into turmoil when youth from Alamutu Street and Alaka-Elegba reportedly engaged themselves in a free for all resulting into looting and burning of shops and buildings.

National Daily had gathered from a police source that youths numbering over 100 invaded Idi-Oro market and allegedly demanded money from the traders but when the youth resisted them, they were attacked.

A woman who spoke anonymously to our correspondent at Idi-Oro market said, “Some market women in their bid to make ends meet collaborate with drug dealers to keep such drugs for them in their shops while they are handsomely rewarded after successfully selling them.”

The drugs are said to be hidden inside their original wares thereby making it impossible for anyone to suspect that such drugs are inside such rented shops in the market.

It was further learnt that the arrest of suspects followed recent tension in the area which claimed the lives of no fewer than four persons and destruction of properties worth millions of naira at the Idioro market.

The Commissioner of Police Lagos State (CP) Fatai Owoseni had paraded some of the suspects last week and used the medium to warn criminals to repent or face the wrath of the command as there is no hidden place for any for criminal element in the metropolis. 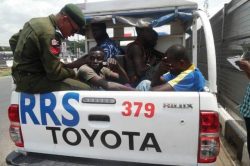 According to him all the suspects will be charged to court to face the consequence of their involvement in the various offences preferred against them.

It was, however, gathered that Police operatives are still looking for those women believed to be the owners of those shops where drugs are found.

The reason according to source was that they locked up and fled the market when fight ensued between rival youth groups who were showed supremacy over who should control the collection of illegal tolls in the market.

According to the Media and Public Affairs Officer of the National Drug Law Enforcement Agency (NDLEA), Mr Mitchell Ofoyeju told National Daily that they have had such cases in the past but are not relenting in their oars to mop up such drugs and arrest culprits.

However, “We work based on intelligence reports. We have discovered such in the past and we shall intensify intelligence covering those shops with a view to uncovering such hidden drugs.”