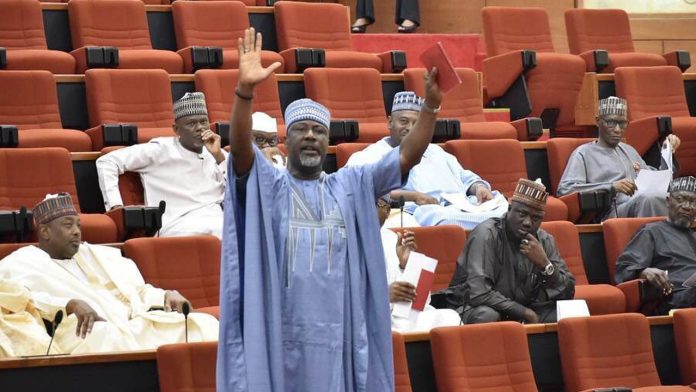 Senator representing Kogi West, Dino Melaye has continued to lament his plight in the hands of the Police since he was rearrested by the Police on Wednesday.
Speaking from his hospital bed at the National Hospital, Abuja, after sustaining injuries while trying to escape from the Police on Tuesday, Melaye said he has been denied access to his family, lawyers, and food.
The senator is being treated at the National Hospital, Abuja, after sustaining injuries while trying to escape from the police.
The police were taking him to court in Kogi when he jumped out of the vehicle he was in.
Writing via his Twitter handle on Wednesday night, the senator said some of his relatives, as well as his driver, have been in police custody since Monday.
He wrote: “Samuel Melaye, Moses Melaye, Pastor Obalemo, my driver Folorunsho, one of my lawyers and seven others arrested since Monday by the police still in detention by the police
“Melaye is at the intensive care unit of the national hospital. Trauma section. Denied access to my lawyers, family members and food for the past more than 24hours.”
Jimoh Moshood, spokesman of the Nigeria police force, who led some policemen to the initial hospital where Melaye was being treated did not respond to enquiries made.
On wednesday, Senate President Bukola Saraki led about 40 senators to see Melaye in hospital.
Briefing journalists after seeing the Kogi lawmaker, Saraki had said though in stable condition, Melaye has not eaten in 24 hours.
“We know he hasn’t eaten for the last 24 hours, we are trying to resolve that. He is on fluids and he is being seen by cardiologists, all specialists. As you know, he has other (health) issues, he’s asthmatic. We are a bit concerned but for now we thank God he’s stable,” he had said.
PV: 0