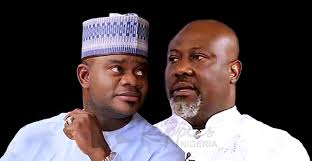 Governor of Kogi state, Yahaya Bello, has accused Dino Melaye, senator representing Kogi west, of merely seeking for cheap attention since the senator is inconsequential in the politics of the state.

Yahaya Bello disclosed this while reacting to allegations that his supporters were responsible for the burning down of a block of four classrooms donated by Melaye to Government Girls Secondary School, Sarki Noma, Lokoja on Wednesday.

He said neither he nor his supporters played a role in the attack, adding that there is a possibility Melaye staged the incident. “The project that was embarked on by him that was burnt down is highly condemnable. I condemn it in its entirety,” Bello said.

“Melaye is an “attention seeker” who may attack himself to get public sympathy. Remember he has orchestrated self-attacks severally in the state and I won’t be surprised in order to draw public sympathy if he organised that for himself.

Melaye and Bello have been at loggerheads for a while now. They fell apart months after Bello was sworn into office over alleged disagreements in political appointments.

When the going was good, Dino served as the chairman of the transition committee for the handing over of power to Bello.

Dino also played the role of master of ceremony during Bello’s inauguration on January 27, 2016.

Yoruba coalition against Buhari splits as Afenifere gets rival