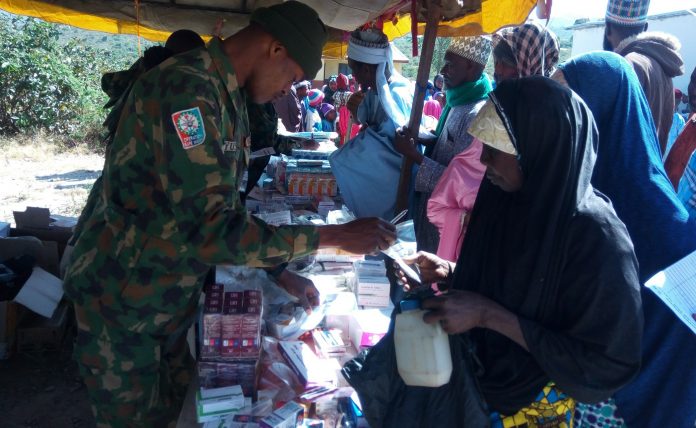 The communities known as Mahanga, a predominantly Fulani settlement and Jol of Berom native, has for the past 18 long years been at loggerheads thereby recording long face-off, cumulating into number of deaths.

However, the OPSH through its non-kinetic approach to wind up its military operations for the year 2019, embarked on civil military relationship to win the hearts and minds of the troubled civilian populace that has hitherto witnessed long protracted crisis.

Speaking while donating relief materials to the people of Mahanga and Jol communities, the OPSH Commander, Major General Augustine Agundu, explained that the initiative is a redesigned architecture to take security management to a new level that would involve active soldier-civilian participation.

Represented by the Chief of Staff, OPSH, Brigadier General, Mohammed Bello, Agundu said: “Our security architecture as a country is one with a very positive outlook.

“We are now consolidating on the gains achieved in the fight against crisis merchants in our general areas of mandate. This is part of the stabilisation phase of our operations, where all efforts are geared towards ensuring that displaced persons are fully returned to their ancestral homes, which are now relatively safe.

“Our campaign is focused on community stabilisation to counter the negative narrative and ideology of hoodlums and terrorists. We shall make more progress when members of community team up to achieve a desired objective”, the Army boss said.

Our correspondent reports that ailments such as malaria, typhoid among others, were treated by the OPSH medical team, as well as relief materials such as food, toiletries, mattresses and other items, were also donated to the communities.