THE Mobile Number Portability (MNP) launched by the Nigerian Communications Commission (NCC) on April, 2013, has been recording increase on the number of subscribers migrating from one network operator to another.

MNP is a service that enables a subscriber to retain their mobile phone number when changing from one mobile service provider to another.

While launching the Service, NCC had hinted on the benefit which gives a subscriber opportunity to switch between services providers without having to go through the trouble of informing their friends, family and colleagues of a new contact number as the number stays the same.

Statistics by the Interconnect Clearinghouse ‎Nigeria Limited (ICN), on Thursday, shows that network subscribers are actually leveraging MNP to their advantage with an average of 601 daily Porting in the period, January and March 2016.

Speaking with journalist, Mr. Oladele Ayanbadejo, managing director of ICN, acknowledged that 601 is the highest average number ‎daily ports they have recorded.

Ayanbadejo‎ said that ICN expects average daily completed ports for 2016 will definitely surpass any figures they have ever recorded.

Journey so far
Speaking on the third anniversary, Ayanbadejo said, “I would like to start by highly commending the Nigerian Communications Commission (NCC), for the introduction of number portability into the Nigerian telecommunications industry. The benefits of the incentive are far reaching.

“First of all, it placed Nigeria at par with the highly industrialized and advanced economies of the world where telecoms consumers have been able to port for decades.

“Secondly, it mitigates monopoly of market share by any of the Mobile Network Operators (MNOs) as a subscriber is free to switch provider at will. The Mobile Number Portability scheme also minimizes anti-competitive practices by the MNOs and creates a level playing field.

Mobile Number Portability is also of immense benefit to the Mobile Network Operator’s as a new entrant Network Operator will find it easier to acquire subscribers. This is because the migration process to a new service provider has been completely simplified”.

He added that existing network operators also benefit from the scheme as it gives them the opportunity to increase their market share, while maximizing the number range allocated to them.

“In addition, mobile number portability is cost effective for Organisations. Corporate communication has become cheaper and easier. Official mobile numbers can be ported to one network and enjoy the benefit of cheaper ‘on net rates'”.

Re-Emphasizing the purpose of MNP
The ICN Boss described the scheme as designed to meet the needs of all consumers and it is available to both pre-paid and post-paid mobile customers.

“Interconnect Clearinghouse Nigeria Limited (ICN) is a wholly Nigerian Owned Company, and it is remarkable that the Nigerian Communications Commission selected and licensed ICN and our technical partners’ iconectiv and Saab Grintek as the successful bidders to implement the number portability project.

“We have recorded tremendous growth since the inception of the scheme and we would like to offer our profound thanks and gratitude to the NCC for the opportunity given to us to contribute positively to the industry,” he said.

MNOs’ Participation
According to the MD, the ongoing support and regulatory guidance given to them by the Commission cannot be over emphasized, adding that mobile network operators (MNOs’) currently participating in the number porting live production environment have also played a huge role in contributing to the successful implementation of the scheme.

“MTN, Airtel, Etisalat and Globacom have exhibited the highest level of professionalism and fair play. This has led to a steady increase in the porting figures.

The Statistics Tell The Story
“There has been a steady increase in number porting since its inception in April 2013. In the period of January 2016 to March 2016 we recorded an average of 601 daily ports. This is the highest average number daily ports we have ever recorded.

Statistics On Average Porting Process Since Inception
In 2014 and 2015 during the same period, ICN said they recorded average daily ports of 315 and 479 respectively.

The increase in the number of successful ports can be attributed to the NCC who have diligently ensured that the mobile number portability participants strictly adhere to the laid down Number Portability Business Rules and Porting Orders.

Down Review Of 90 Days Porting Restriction Window
He said that NCC has also taken certain proactive steps which have improved the porting experience.

“This reduction in the number of days a subscriber can stay on a mobile network, before having the liberty to move to another network led to an average daily increase of about 35 to 45 completed ports.

“In addition, the NCC modified the Number Porting Business Rules, to place a porting restriction on newly registered numbers.

“All newly registered numbers are restricted from porting for seven days after registration. This has helped to curtail the activities of mischief makers”, he said.

While thanking the technical partners, Ayanbadejo‎, said that iconectiv and Saab Grintek displayed unique set of specialized skills and immeasurable expertise that they brought to the implementation of the scheme. 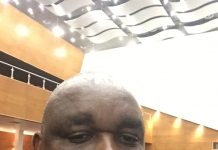