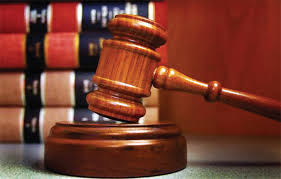 Oluwatosin Bakare, an Ibadan-based businessman, on Wednesday, told an Ile-Tuntun Customary Court sitting in Mapo, Ibadan, to dissolve his seven-year-old union to his wife, Enitan, because she frequently beats him.

Mr Bakare, who lives at Labo Owo, Dugbe area of Ibadan, cited frequent battery and threat to his life as reasons for his prayers for divorce.

“My refusal to make a thorough research before I eventually got married to Enitan is the reason behind my problem today.

“My lord, as soon as Enitan got into my house, she began to act ‘strange’. She challenges my authority on most issues.

“ I have made efforts to correct her misbehaviour by informing our pastor, but rather than turn a new leaf, Enitan’s attitude worsened, making the pastor’s intervention ineffective.

“In October 2018, Enitan, on entering our bedroom, gave me a deafening slap as she followed it up by bringing out a knife to stab me.

“I, however, managed to escape unhurt.

“I can’t count the number of times she had attacked and torn my clothes in the church and at other public gatherings.

“Sometimes, if I leave the office late, Enitan would challenge me and even beat me on getting home.

I stopped reporting her to her parents because they were obviously not interested in what becomes of her.

“Since I married Enitan, seven years ago, she has not conceived. And evidently, there is no more love between Enitan and I, so do separate us,” he said.

The respondent, who, however, opposed the divorce, was unable to deny most of the allegations levelled against her.

Enitan, a Laboratory attendant, instead submitted that her spouse was the best man to be with.

“My lord, our pastor is the problem in my marriage to Oluwatosin.

“The pastor has convinced my husband to marry another woman from his church.

” I noticed a change in my husband since I had a miscarriage. He refused to show any concern.

“He started coming home late and also stopped performing his roles as husband,” she said.

The President of the court, Henry Agbaje, requested them to provide more evidence to substantiate their claims.

He adjourned the matter until April 4 and asked them to produce their relatives.

I did abortion for my daughter just one, not three times – Father