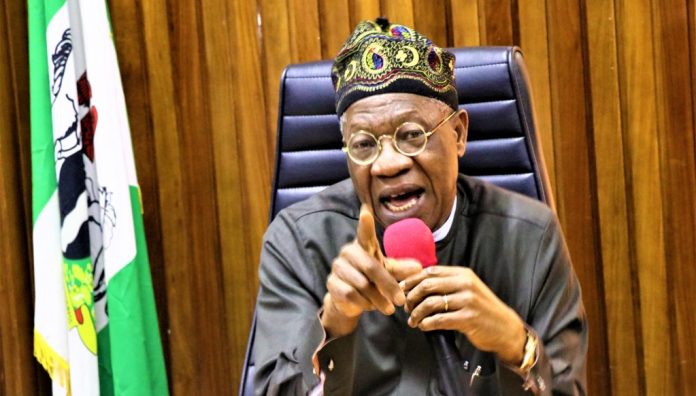 The Federal Government says at the conclusion of the on-going reform in the creative industry and advertising sector, the country will earn two billion dollars in advertising within three years.

The Minister of Information and Culture, Alhaji Lai Mohammed, said this in Abuja at a technical session of the Task Team on Audience Measurement inaugurated by the government.

Mohammed who said the N400 million the country was currently earning from advertising, was unacceptable reiterated the position of the task team to raise it to two billion dollars within three years.

He said with the conclusion of the reform process, the entire creative industry would never be the same again.

The minister commended the team’s efforts at ushering in a time of great prosperity for the entire creative sector.

“The metrics and data you will be putting together, the Standards of Practice on receipts and payments, the media monitoring service powered by technology for real time performance evaluation will create transparency and an enabling environment for all to thrive and be prosperous.

“What most, if not all have always asked for is a level playing field in our great country of more than 200 million people, over 500 radio and television channels, with at least 24 million TV households with the largest Gross Domestic Product (GDP) in Africa.

“I hear you are also working on a sustainable content development plan to ensure a win-win for Content Creators, Production companies and TV and Radio Broadcasters.

“This is music to my ears and is exactly what Mr President promised when we came into government – Reforms that will touch and improve the lives of the common Nigerian man,’’ he said.

The minister said that the reform process would also unlock the one million job opportunities in the potential of the creative industry.

He assured that the government would open the doors for funding donors to make the reform a success.

According to Mohammed, the government will create conducive business environment for all the international advertisers and agencies to rush to do business in the country.

The Chairman of the Task Team, Mr Tolu Ogunkoya thanked the minister for his vision and passion for the industry and for his presence at the technical session.

He assured that the committee would work hard to meet the November target for the completion of the exercise.

Ogunkoya noted that the practitioners including members of the task team would be the ultimate beneficiaries of the reform process.

He said upon successful completion of the project with its multiplier effects on the industry, the name of the minister would be written in gold.

The News Agency of Nigeria reports that four presentations were made by experts at the technical session on relevant areas of reforms.