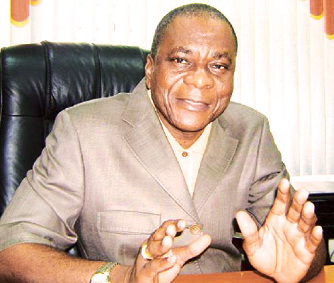 Mr. Lucky Amiwero is a frontline maritime industry stakeholder and also founder of the National Council of Managing Director of Customs Licensed Agents (NCMDLCA). In this interview with RICHARDS ADENIYI, he speaks on the challenges in the Maritime industry and why Nigeria lost at the recent International Maritime Organisation Council elections.

How would you appraise the year 2019 in the Nigerian Maritime sector?

In 2019, the industry has been so badly hit; there have not been any improvement in the maritime industry and the sector instead of moving forward it is moving backward. So 2019 2019 has been so bad for the Maritime Sector. If you look at the Gross Domestic Product (GDP) they contribute nothing. It is too bad for an industry that is supposed to generate up to N600billion or more in GDP. But when you look at the whole thing, it is shifting negatively and it is not too good for a country like Nigeria. We are losing in every area, regulations are not complied with and things are not done properly. So we have a problem with not doing the right thing and these things have to do with the government sometimes and on the other time with the people. So that is it, the year 2019 has been so bad in the industry.

In view of that, what are your expectations in the coming year 2020?

The year 2018 was bad, 2019 was bad and what do you want me to expect in 2020, there is no expectations. The same people who have been running the industry are the people who are still running it, so what do you expect and they don’t take advices.

When you are looking at the coming year 2020, I don’t know what you are looking at. Look at the roads, they are still there, look at the ports, no scanners and many things are not working. Look at the conventions, we are not complying with them; we do things that are not going well with the conventions most of things we are supposed to do we are not doing them. We have a static system that is actually the devil in the maritime industry, a system that is not moving.

Recently, Nigeria lost the category ‘C’ in the elections at the IMO, what is your take on that?

We will continue to lose until we begin to comply with our conventions, we are not complying with them and we don’t even know most of them. So you go to IMO meetings to play politics. In that place they have to look at your technicalities and look at what makes you a maritime nation. But in Nigeria, a maritime nation in the real sense of it, the answer is No. Because we don’t have ships; we don’t even have national carrier, our cargoes are distributed here and there.

So what makes you a maritime nation – yes you have throughputs, but who are the people handling your throughputs – they are foreigners. You don’t have a national carrier. The provisions according to the Act are that you are supposed to have a national carrier but there is none. So nobody is actually involved in the carriage of Nigerian cargoes technically speaking based on the NIMASA Act. So when you lose to IMO, why did you lose, what are you doing in line with IMO conventions? That is where you have problems; you have other people who are complying.

The conventions are there, most of them have been signed while most of them are still going through the National Assembly for it to be ratified so that it can become a law.

Most of the conventions we signed are just hanging and if you don’t bring them into the National Assembly for them to be domesticated, it is not a law and it cannot be implemented in the country. So those are the issues and we run a system that is so bogus and we are not focusing much on what we are doing.

There seems to be high rate of building in Apapa due to the traffic gridlock, what do you have to say about this?

In 2009, the former President, Umar Musa Yar’Adua approved for the road to be constructed from then till now the road is not yet constructed 10 years after and we have 7 per cent of ports development levy. And when you look at those roads they are called ports access roads to the port because all the ports are within the access roads. When you look at  laws they are there. NPA are supposed to have done that, but I think they are battling with Federal might and all the rest of them. We are just suffering and the problems are just that we are losing out in the whole thing, other countries are benefiting from our ignorance and the inefficiencies. We will keep talking we cannot go and fight the government; desk officers cannot solve the problems.

We have a very terrible system and like we are talking about the houses in Apapa, when you have gridlock, what do you call gridlock? It means that it is blocked permanently, when you want to go to Apapa it takes you days. So many people have relocated and many companies closed down and when you closed down it is going to affect everything. It has affected many things when you go there you see empty offices. The issues can only be resolved when experts are called in. When the concession was going on, I was in opposition of it because it is not good, but it was not properly done.

There seems to be high rate of abandoned building in Apapa due to the traffic gridlock. What do you have to say about that?

Some people are saying that the border closure is an indictment on the customs, what do you have to say about that?

The border closure is not a customs issue, it is an issue we don’t know where it is coming from, but we saw that customs is at the forefront. Border closure is normal if it is done properly but the only thing is how it was done and there are some areas the government has not looked into by the provisions of the law and all the rest.

So we don’t know who closed the border whether it is customs or the National Security Adviser (NSA). We don’t know if the enabling power was given to them and you don’t close the borders there are other treaties, conventions and protocols that you had signed that has to do with the border. It is a corridor. And there are three legal entry points seaports, airports and border stations and the border stations is the corridor and we had the corridor agreement with the European Union (EU). And it they are doing those things they are supposed to put a lot of things into consideration. If it is on security issues but when it comes to trade, it has negative impact.

Share this on WhatsApp
Related Topics:Mr. Lucky AmiweroNational Council of Managing Director of Customs Licensed Agents (NCMDLCA).
Up Next

FG sets up committee on disbursement of N72bn