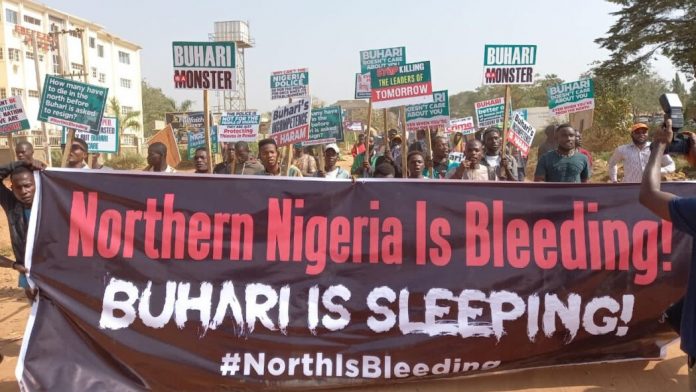 Kano Secretariat of the Nigeria Union of Journalists, NUJ (Press Centre) was on Wednesday December 15, sealed by operatives of the Department of Security Service (DSS), the Police and other security agencies.

The Press Centre is the venue of the #NorthIsBleeding protest. The protest was organized to raise an awareness over the increased insecurity recorded in the Northern region of the country.

Daily Trust reported that the protest did not hold as security vehicles with fully armed personnel were stationed and spread across the street, while the gate of the Press Centre was shut.

One of the conveners, Barrister Abba Hikima who addressed newsmen said;

“The essence of this precession is to protest and show our anger on the happenings and the way things are going on in this country security-wise.

“Everyone in this country regardless of where he comes from is aware of the nature and security of Nigeria and people are aware that nobody is sleeping with his two eyes closed right now and nobody is doing anything about it.

“Our leaders don’t seem to care but only concerned about things that are not important – book launch and others.

“That is why we are here to call on this government that we are the electorates that send them over there. They are supposed to be our servants.

“We don’t have to write to the police or anybody before we can come out and protest. This is a decision if the court and this is the provision of section 39 in the Constitution of Nigeria.”

Kano state chairman of NUJ, Abbas Ibrahim who reacted to the development, stated that they never gave anyone permission to hold or use the Press Centre as a ground or starting point for any protest.

“What we know is that a group called Coalition of Northern Groups have informed us of a press briefing which they want to use the Press Centre to hold. But when our attention was drawn to it in the late evening hours of yesterday, we decline the permission and ask them to use another place.

“We have not granted any permission to anybody to come here and start a protest.”