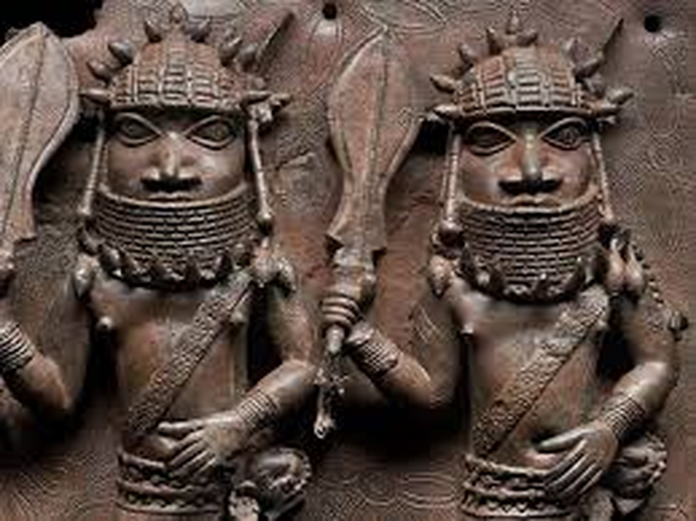 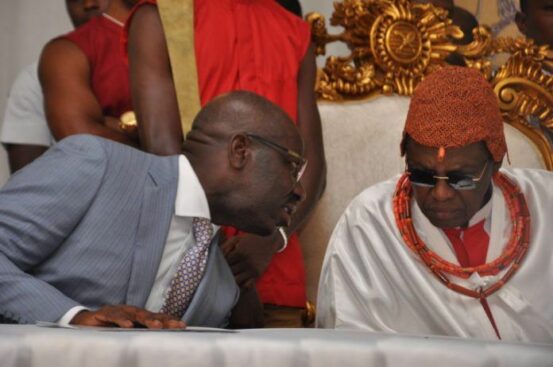 In the latter days of repatriation of looted artworks of an ancient kingdom 600 years old, a state governor rises against the kingdom’s heir—in the name of patriotism

Edo Gov. Godwin Obaseki had a backwind from the Benin people when he won reelection in 2019; but the wind is going out of his sail now. The people are backing off because the governor is driving a hard bargain with their Oba—over His Highness’ heritage.

But he needs a better understanding of the lay of the battleground now. No doubt Obaseki wants to duke it out with the Benin royal family—a royalty that predates Nigeria—-over the repatriation of looted Benin arts adorning European museums. The battlefield, now, however, is different from what it was when the UK massacred and looted the royal palace in 1897.

As Ewuare II noted, the descendants of the looters are feeling gut-wrenched now, and are willing to restitute. But 124 years hasn’t changed them much. The UK role in the expected repatriation still rings familiar: manipulating the state (Edo) against the Benin kingdom. And, instead of deploying boots on the ground in Benin City, the UK is using the British Museums, especially its agent, an alien to the commonwealth of the Benin people, but a willing collaborator with the Edo government.

Over 5,000 of the art works have been stashed in more than 160 museums across the world. Dennis Osaretin, legal and policy adviser to the Oba, said nine of the museums in Germany and the UK have prepared to return the loot.

Ownership and custody of the 1,130 pieces coming home to Benin have however triggered a war between the state and the Benin Kingdom. One is pulling rank on the other.

In his letter to the Oba, Obaseki expressed concerns over the simmering misunderstanding. The governor said it could give “the detractors and those opposed to the return of the objects the excuse to delay such return”.

Also Read: The Benin Artifacts as heirloom of the Benin People

True, both the Oba and the governor agreed initially—and still do up till now—the artifacts are due for its provenance: the Benin royal palace.

“It also gladdens my heart to know that the Edo State Government recognizes the fact that I and the Benin Royal Family remain committed to genuine efforts being made to demand for the return of all Benin artifacts,” the Oba wrote in a letter to the governor. “[They] are to be housed in a specially built Benin Royal Museum to be sited within the precinct of the palace.”

Ewuare II also stated that, as the rightful owner of the works, he already set up a funding vehicle, the Ewuare II Foundation, and the Benin Traditional Council to midwife the repatriation. That setting up happened as far back as 2017.

And Obaseki jibed with, at least, the Oba’s idea of a specially built structure and its location. The governor’s dream, as he himself stated in his letter, is a “complex that will provide a comprehensive, world-class set of infrastructure for the storage, research, display of the objects”.

The Oba, in his letter, wasn’t just raking that matter up as a fresh idea. It was a reminder of the understanding he already had with the governor. The Benin Dialogue Group, a body comprising reps of the UK, Germany, Nigeria, Edo government, and the royal family, founded in 2010, long before Obaseki became governor, had that understanding, too, after five meetings in Vienna, Berlin, and Benin. The Cambridge session, which was supposed to have come up in 2020, failed.

In the course of their dialogue, the group even drew up the Benin Plan of Action. Its components include collaboration between the Royal Court of Benin and the National Commission for Museum and Monuments, loaning and display of arts, and others.

“It was also agreed that steps would be taken to raise funds for a first-rated and standard museum in Benin City, to be called the Benin Royal Museum,” Osaretin said. To show enough good faith, the Oba cut the state some slack—to hold the arts in trust for the royal family.

With all this understanding between them all along, one of two things could have precipitated the situation in which the state and the royal family now come to blows.

One: Obaseki might have been seduced by an outlandish suitor, and he turned his back on his Oba. So custody and ownership of the about-to-be-repatriated works, historically a forgone conclusion in the Benin culture, now become the bone of contention.

Or it was possible the kingdom and the state have been nursing their parallel designs on the repatriation.

As per the plans, the difference is clear:  Obaseki’s, in structure and funding, looms ambitious and elephantine —in the name and the reach and other perks at stake for him. For that reason, he’s made up his mind to wield the state powers to muscle the Ewuare II Benin Royal Museum under his own—the Edo Museum of West African Arts (EMOWAA). And he’s set up a funding vehicle, all his own: the Legacy Restoration Fund (LRT).

“It is our intention the Benin Royal Museum can also benefit from such infrastructure and funding,” he wrote in the letter, reminding the Oba of the EMOWAA inaugural announcement in 2019.

It was a fast one Obaseki pulled off there. And such skullduggery is not unexpected of a politician who likes to make a statement.

The governor has not only supplanted the Benin royal family by swallowing up the royal museum plan; he has also foisted his funding plan on the Oba’s: the Ewuare II Foundation.

The governor has his motivation for one-upping the Oba. According to him, Germany and other countries complained, in the course of the BDG activities, of three things: the state lacks the modern museum facilities required to keep the art works; a cacophony of claims of ownership and custody; and the lack of international funding vehicle, largely driven by the private sector. All these problems crippled the BDG, he said.

“It is for this reason I requested for a new vehicle to be established and be initially chaired by a seasoned financier who is familiar to the international investment community.”

The LRT chairman is Iheanacho Phillip. He’s Obaseki’s man Friday in the investment banking company the governor owns.  Another one is David Adjaye, a British Ghanaian architect. Neither a member of the BDG nor a Benin indigene, Adjaye got his own appointment in 2020, thanks to the British Museums.

“Adjaye proposed a different name (EMOWAA) and class of museum distinct from the original one proposed by the BDG,” Osaretin said. The architect also floated a $4-million fund for excavating the site of the museum for whatever antiquities buried there. He has yet to even contact the palace concerning the dig.

Ewuare II wouldn’t take any of these—Iheanacho, Adjaye, and others, with their money spinner. Not even Obaseki’s mollycoddle, a facade of unity and agreement he pleaded for in the letter to the Oba, and which he tried to sell Germany.

“For categorical clarification,” the Oba told Obaseki in response, “these individuals and group of persons are not known nor authorized by the Oba of Benin who is the original owner of the looted artifacts and the custodian of Benin culture and tradition.”

He warned Nigerians and the general public to have no dealing, on the repatriation, with any faceless individuals and groups.

But faceless or not, Obaseki’s co-travellers seem on a roll. Euros have already started rolling in: €4.5 million from Germany, according to its Foreign Affairs Minister Heiko Maas.

And it was confirmed.

“The trust has attracted funding from both international institutions as well as local sources on the back of authorization by the state and the federal government,” Obaseki told the Oba in his May 14 clarification.

The governor’s explanation and defence could strike a chord. Especially with those who know little about how much the Benin people are invested in their arts and their monarch.

But to those in the know, Adjaye’s intervention and Obaseki’s buy-in are an intrusion, and unnecessary. The Benin kingdom said it has all it takes to handle both the custody and ownership.

This won’t be the first of such projects the kingdom will handle.

And tor the repatriation, the Ewuare II Foundation and the Benin Royal Council have been readied to make the Benin Royal Museum a reality. Any intervention on that point by a Johnny-on the-spot, the Palace insists, is of little help. And of no help at all now that such has become meddlesomeness, which has pitted the governor against the Oba, his Benin Council of Chiefs, and the Benin people who believe their arts aren’t just pieces of bronze heads, busts and pendants.

“Oba of Benin is the sole paramount ruler and custodian of Benin tradition, culture, and also the spiritual leader of Edo people.”

Other groups and coalitions, home and abroad, have since launched a fusillade of attacks on the governor for trying to use the state power to rob Ewuare of his heirloom, and the Benin people of their cultural identity.

Obaseki has denied all of these, emphasizing his respect—and his government’s—for the Oba.

“The governor has consequently ordered that on no account should anyone, whether in government or acting independently, engage in disrespectful exchanges and/or altercation with our revered Royal Majesty and the Benin Royal Palace,” said Osarodion Ogie, secretary to Edo government, in a press release July 11.

Nothing will chip at the mutual respect, sure.

But both sides have stuck to their guns. Even the state trusteeship Oba initially conceded has been cancelled.

“The federal government should take custody of these artifacts on behalf of the palace until the Benin Royal Museum is ready for their collection,” the place announced on behalf of the Oba.