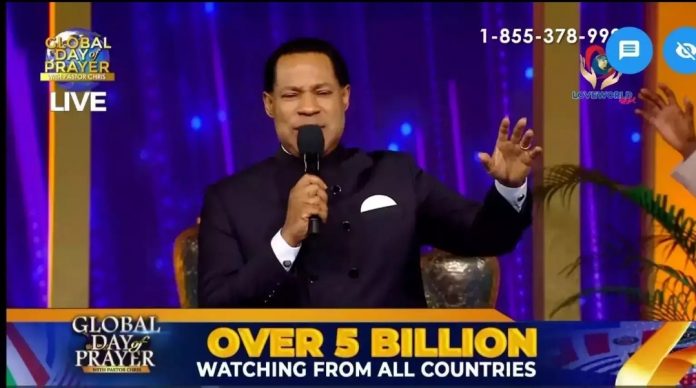 Pastor Chris sets new world record with more than half the population of the world joining him for the epochal prayer program.
The historic, first Global Day of Prayer with the man of God, Reverend (Dr.) Chris Oyakhilome, in the year of preparation, 2021, took the airwaves at 6pm GMT+1, Friday, March 26th through to Saturday, March 27th. With a record of over 5.3 billion participants from around the world, the phenomenal the clock prayer expedition which also marked the one year anniversary of the Global Day of Prayer with Pastor Chris was a monumental success. 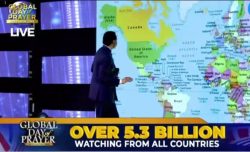 The 4 previous editions of the Global Day of Prayer, resulted in notable changes across the globe such as the opening of places of worship, lifting of lockdowns and resumption of commercial activities in hitherto, locked down cities and nations and other remarkable changes. This 5th edition was no doubt more impactful as the glory of the later house surpasses that of the former.

Opening the 5th edition of the Global Day of Prayer, LoveWorld President, welcomed participants from all around the world amid great rejoicing. He heralded how gracious and kind God has been to His saints, the global impact of the Global Day of Prayer since its inception a year ago and the need for the Church to continue in fervent prayers. The man of God further exhorted the saints on prayers, leading the global participants in heartfelt prayers to God.

An exclusive documentary titled ‘An Amazing Journey of Faith through Trying Times’ was featured. The story reveals how the man of God, Pastor Chris, audaciously led God’s people through effective prayers and the teaching of the Word, to triumph over wicked machinations against nations of the world and the church, in the last one year. This set the direction for the prayer sessions that followed.

Coursing through Africa, Europe, North America, Asia, South America, the prayer chain continued unbroken as senior ministers in the LoveWorld nation including the esteemed Rev. Tom Amenkhienan, Rev. Ken Oyakhilome, Rev. Ray Okocha, Pastor TT Temisan and others took the prayer baton and led in prayers. Seasoned ministers of the Gospel from partnering ministries across the globe also took turns to lead in prayers. Prayers were led from India, Brazil, Nigeria, Germany, Canada, Madagascar, Hungary, Romania, Spain, Ghana, Malta, the United Kingdom, the United States, South Africa, Zimbabwe and several other countries. Fervent prayers were made for leaders of nations, the salvation of souls, new converts in churches, the sick, youth and children. Prayers were also offered against satanic doctrines, cultures and ideologies, violent attacks of churches, false information and deception in nations among others. As the various ministers led in prayers, they also gave profound words of prophecies concerning the nations, the Church, the spread of the Gospel and more as inspired by the Holy Spirit.

The prayer program also witnessed a special session of profound teaching and prayers led by world renown healing evangelist, Pastor Benny Hinn, from the United States of America. Electrifying ministrations in songs led by different choirs and groups across the LoveWorld nation stirred heartfelt worship to God in participants as they prayed.

The over 24 hours prayer marathon came to a climactic close with a power-packed final session with Pastor Chris on Saturday, March 27th. Pastor Chris expounded from scriptures on the connection between pharmacy practised with occultic inclinations and soccerry as described in the Holy scriptures. He then led the saints in prayers for the liberation of the nations of the world. Songs of victory and rejoicing ensued as participants from around the world joined Pastor Chris to celebrate answers to prayers and ultimately total victory over the cohorts of darkness.

The impact and success story of the 5th Global Day of Prayer will continue to resonate across the globe even as we look forward to the next edition in the second quarter of the year.