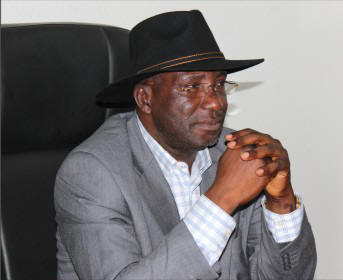 Share this on WhatsApp
Spread the love
….calls for arrest of Dakuku, Abe, Uchendu, other Rivers APC Leaders
By Nwadike ugochukwu, Port Harcourt
The chairman, Peoples Democratic Party, Rivers State chapter, Felix Obuah, has expressed disappointment over what he called continued show of disrespect for the law and breach of public peace by members of the All Progressives Congress, APC, led by Dakuku Peterside, Magnus Abe, Andrew Uchendu and other leaders of the party in the State.
The PDP chairman, in a statement signed by Jerry Needam, the Special Adviser on Media and Publicity, observed and considered today’s event tagged, ‘Rivers Black Day,’ organized by the APC, which according to them, was to remember those killed during the 2015 general elections, as clearly a demonstration of impunity, and disposition to cause crisis, and to incite not only their members but the people of the State against the security commands and constituted authorities in the State.
The PDP is aware that following recent incidences of violence associated with public demonstrations in the State, the Rivers State government, in collaboration with the State security agencies, placed a ban on all forms of public protest, wondering why in spite of the subsisting order, the APC leaders still went ahead to organize such  procession in the State. This, to us, is a flagrant disobedience and disregard for the law and State authorities, and should not be taken for granted.
It is also a cause of concern that the remembrance event is being held this period and on this date, which in no way, was not the date the alleged deaths took place. It is therefore, an undisputed fact that organizers of the event deceitfully dressed up a public procession aimed at causing violence and crisis in Port Harcourt and making cheap political points by blackmailing the PDP and perceived political opponents in the State.
The PDP also wishes to draw the attention of the security agencies and other relevant government authorities to the fact that the State APC failed governorship candidate, Mr Dakuku Peterside, was always being referred to as ‘the Governor’ by speakers at the event, which was televised live on the NTA network during the session. To us, this is a treasonable offense and should be investigated and those culpable be arrested and prosecuted accordingly.
Again, our charge to the Police and other security commands in the State is to forestall further breakdown of law and order by arresting organizers of this illegal and rebellious procession in the State to serve as deterrent to others, otherwise, other groups may refer to the APC procession as a precedence and carry out their protests. A stitch in time saves nine.
The PDP again, vehemently denies allegations of killings leveled against its members and leaders by the APC, describing such allegations as fabricated, misleading and diversionary.
Share this on WhatsApp
Related Topics:APCElection Petition TribunalPDPPoliceRe-runRiver State
Up Next