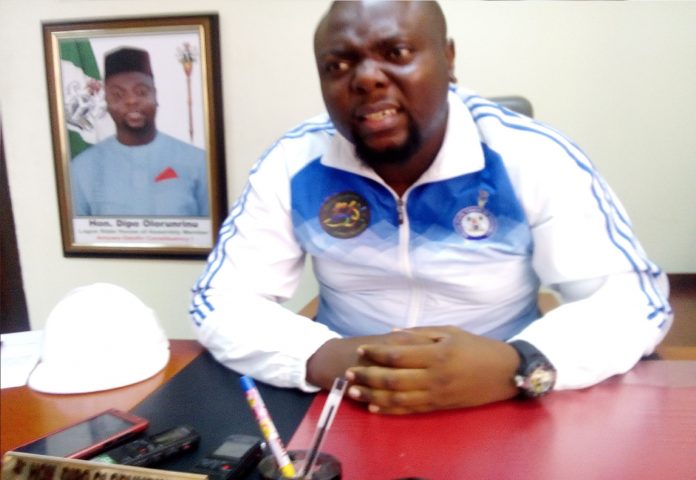 Share this on WhatsApp
Spread the love
By Olanrewaju Adesanya
The only member of the Lagos State House of Assembly flying the Peoples Democratic Party’s (PDP) flag, Hon Dipo Olorunrinu has picked holes in the recent harmonization pact occasioned by the national caretaker committee of the party, citing the fact that it was fraught with structural anomalies.
The lawmaker clearly piqued by the shoddy manner the harmonization plot was crafted, wherein Lagos stakeholders were relegated in the order of importance, noted that except something drastic is done to address the anomaly, the party’s Convention slated for December may be grossly undermined.
According to the young but articulate lawmaker, the most important base of harmonization has been bartered by the sharing formula adopted by a not too sensitive handler, Who largely belittled the importance of grassroots in the political permutations.
“The people’s rights and mandate has been utterly declined,by PDP National Vice Chairman/Zonal Chair South East,how can you be focusing on the House of Reps giving them  some  form of privileges over the masses.
“Is it the House of Reps that just got themselves there? I mean the ones representing us at Abuja, of course not, the people gave us all opportunity to be there, we are all public servants, why are we playing Abuja politics?
“You keep complaining from Abuja,Lagos is this, Lagos is that,Lagos State polity is sane and without issues,I am part of the youths in politics today,I stand for the truth, we cannot go on using Lagos  as a bait. We have prospect but there are some people coming to decimate our prospect.

“Why is this Deacon brought from South/East that knows nothing about Lagos State polity come in as a returning officer and has come to jeopardize it,striking deals with House of Reps members. He has never confronted the people, even stakeholders or the factions.

“I am not averse to the coming together of the Senator Alli Modu Sheriff and Senator Ahmed Markafi groups but why is he given preference to the House of Reps members, I am a Lagosian and have people letting me know that he had struck a deal with them.
“Favouring the House of Representatives member far above the system that churn them out as elected officials, by allotting to them 70 percent, while the leadership and party stakeholders were given 30 percent with the three factional leaders having 10 percent each.
ALSO SEE: Yoruba group takes on Buhari over Oke’s invitation by EFCC
“With this arrangement you are creating more problems for me here I can’t manage such problems because they are sitting down there in Abuja moving motions,they should come back and give feedback to their constituents, Senator Ahmed Markafi led caretaker committee should harmonize correctly.
Speaking on how to remedy the situation,Dipo highlighted the indisputable factors,citing the importance of the party.
“When harmonizing you look at the grassroots where the strength lies, the popularity and acceptability,people are not voting for personality, do your surveillance in the grassroots, people are ready to assess this people have they done well?
“Some of these Reps member have never been to the secretariat. This first stage of harmonization has been jeopardized.
“The mistake must be redressed at the ward level, this is Lagos a populous state, we should get things right as this may likely affect the convention,we need to redefine PDP in Lagos,grassroots harmonization is the most important.
He further noted that,”though the panel disagreed with the chairman, he jeopardize the first stage of harmonization,I need the movement of the party, I don’t want to go further on other things I have heard,but I want to reiterate that we are very well United in South/West.
“I see all these as antics by the people in Abuja, a cheap way of achieving the Exco for their reelection in 2019.
Share this on WhatsApp