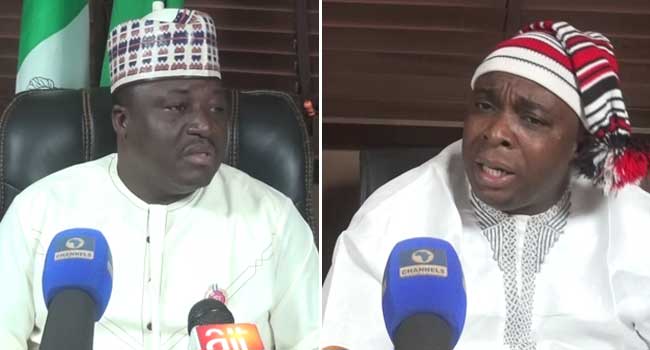 The Ohanaeze Ndigbo has taken the lobby for a southeast presidential candidate in 2023 to the Arewa Consultative Forum in northern Nigeria. The Secretary-General of Ohanaeze and leader of the Nigerian President of Igbo Extraction in 2023, Mazi Okechukwu Isiguzoro, on Monday held consultation with representatives of the Arewa Gorum to solicit the support of the north for a presidential candidate from the southeast in 2023 in the interest of justice and equity in Nigeria.

Okechukwu Isiguzoro, who doubles as Secretary-General of Ohanaeze and leader of Nigerian President of Igbo Extraction in 2023, on Monday led a delegation of Igbos on a courtesy visit to the President of Arewa Youths Consultative Forum, Alhaji Yerima Shettima, in Kaduna State, to seek the cooperation of the north in the emergence of the next president of Nigeria from the southeast. Isiguzoro affirmed the commitment of the Igbos to a united and indivisible Nigeria, repudiating the secessionist struggle of the Indigenous People of Biafra (IPOB) led by Nnamdi Kano.

Okechukwu Isiguzoro had declared: “We know that the North with their population and the vast majority will always play the role of a kingmaker, being a deciding factor in 2023 presidency. We feel that the best thing to do is to migrate from the other side of the world and interface with the real people who are holding the masses.

“Is it because one person somewhere decides to paint Igbos as if we are Biafrans? No, we believe in one Nigeria. The vast majority population of Igbos are residing in 19 northern states. We have about N2.3 trillion worth of investments of Igbos in Northern Nigeria.

“And by so doing, we said no. The best thing we have to do is to ensure that we reach out to the fulcrum of the society, the people’s general, Yerima Shettima to dialogue on the way forward with regards to 2023.”

Isiguzoro revealed that Ohanaeze Ndigbo worldwide has mobilized adequate resources to support any presidential candidate from the Igbo nation in any of the two major political parties, the ruling APC and the opposition PDP.

The President of Arewa Youths Consultative Forum, Yerima Shettima, acknowledged the importance of courtesy visit; however, he condemned the violence associated adopted by the IPOB in the struggle.

Yerima Shettima, disapproving zoning of president to a region, declared: “you can’t deprive people of asking for what they want and you can’t stop them from demanding for what they think, it is their right. But it is either we meet and discuss the issues and agree in principle or we will discuss it over and over.

“Whether it is going to go your way or my way, we still need each other. The most important thing is that you come and this your coming has really mended little or major aspect of what we felt in the northern part of the country.

“Politics is about negotiation; it is about meeting people to discuss and lobby. You don’t just seat down in your little enclave and make noise. Some of us here don’t know what sit-at-home means. We are in the northern part of the country; it does not affect us.

“It affects your economy directly or indirectly. But for us, we are comfortable because you cannot declare sit-at-home in the northern part of the country, and we have said it over time.”