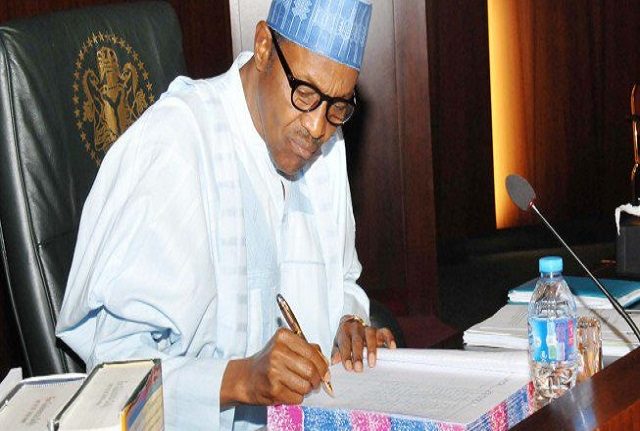 Buhari signed the budget today, May 6, 2016, after weeks of back and forth between the Presidency and the National Assembly.

The budget signing was witnessed by Vice President, Yemi Osinbajo, Senate President, Bukola Saraki, House Of Representatives Speaker, Yakubu Dogara, Minister of Finance, Kemi Adeosun, Minister of Budget, Udo Udoma and Chairman of the Senate Committee on Appropriation, Danjuma Goje and his counterpart in the House Of Reps, Abdulmumuni Jibrin.

It had been earlier reported that the president would assent to the budget today after receiving the corrected and ready-to-sign version on Thursday, May 5.

“All things being equal, the President will on Friday assent the 2016 Budget. The two committees have finished their work and a clean copy is now with the Presidency,” a source told The Nation.

“There are high chances that the budget will be signed tomorrow (today). In fact, I can tell you that the chances are up to 70 percent, because all the necessary things have been done and the president is already in possession of the document,” another source told Daily Trust.

The budget has been the centre of controversy since it was reported missing from the Assembly premises in January.

Senate President, Bukola Saraki later said that two different versions of the document had been submitted to the legislative house.

The controversy led to the sacking of the Director General of the budget office, Yahaya Gusau and the redeployment of 22 officials from the Ministry of Budget and National Planning.

The budget was finally passed on March 23, 2016 after the Senate and the House of Representatives both received the requisite report from the Joint Committee on Appropriation.

The controversy did not stop there however as President Buhari still refused to sign the budget due to issues with the final details sent by the Assembly.