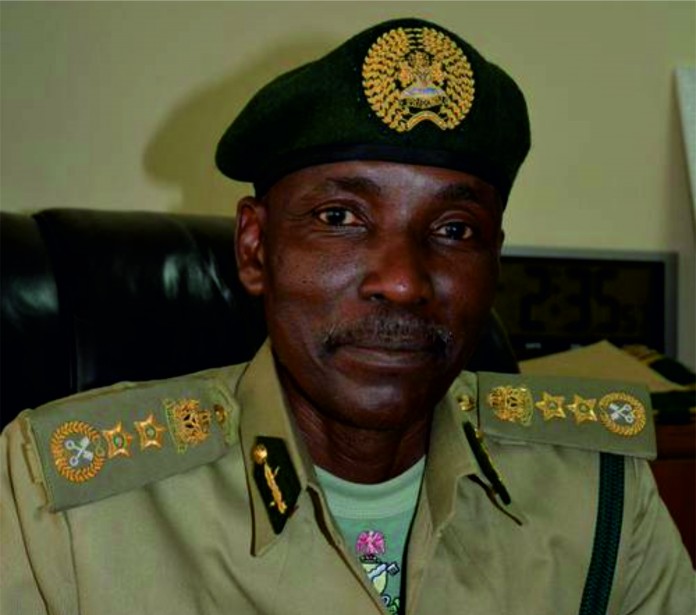 THERE seems to be more trouble for Comptroller General of the Nigerian Prisons Service, Ahmed Ja’afaru, over alleged secret recruitment of Prisons Wardens in favour of a particular section of the country. This seeming fresh controversy is being unveiled at a time the Federal Government and the Nigerian Prisons Authorities are still getting some knocks over last week’s prisoners’ escape at the Kuje prisons, Abuja, which led to the escape of two notorious kidnappers. There are emerging innuendoes that the Comptroller General of Nigerian Prisons Service, and the Minister of the Interior, General Abdulrahman Dambazau (retired), might have secretly recruited some Prisons staff without following due process as specified by law and in defiance of Federal Character principle.

National Daily investigations revealed that a total of 538 recruits have been hired to work in the prisons without following established laws for public service recruitment exercises.

It was gathered that the recruits segmented into two batches are presently undergoing training at the Prisons Training Schools, Kaduna and Kirikiri Town, Lagos, respectively. It was also learnt that they commenced training over two weeks ago.

According to the list, the 538 new recruits were hired with some in the category of Assistant Superintendent of Prisons (ASP), among whom 312 were deployed to Kaduna training centre.

A Prisons officer told National Daily, on condition of anonymity, that the Prisons staff were not aware of the recruitment at the time it was conducted. “We have vehemently kicked against the recruitment even though they have resumed training at the various training institutions,” he said.

While venting his angst and anger over the illegal recruitment, he complained that, “there was no advertisement, no publication in any newspaper or online platform about the Prisons recruitment. No one collected forms. All we saw was that new recruits were employed and sent to various training centres.”

He protested: “If this government claim to be serious with fighting corruption, illegal recruitment of this nature must not be allowed. The minister manipulated the whole thing. In fact, this recruitment was given to their boys and the highest bidder. We have been monitoring when the forms would come out so that our loved ones can apply for the job.

Unfortunately, there was no form from the Nigerian Prisons known to me as a staff. It didn’t happen at all. How can you employ 536 without people knowing about it? Who selected them? How were they selected? This is the height of corruption and impunity by government appointees.”

The Prisons staff maintained: “We had this scenario in previous governments and we thought with the exit of the Peoples Democratic Party (PDP’s) government, especially, with the on-going anti-corruption drive, nonsense of this magnitude would stop. I have been in the Prisons Service for over two decades; I have not seen a thing like this before. I think President Muhammadu Buhari should immediately institute a probe panel to unravel those behind the recruitment.”

“These are the kinds of characters they recruit clandestinely – some not properly trained – that aid and abate dangerous prisoners to escape from prison facility,” he said.

Asked what the Prison officers are doing about the recruitment, sounding frustrated, he said, “We have no choice. Some might write petition(s) to the Minister of Interior, what will happen? Is he not the one that orchestrated the recruitment? He will definitely kill the petition. This is not good for the image of our country. This illegal recruitment is also going on in Nigerian Immigration Service too,” he added.

With a total number 214 Prisons in Nigeria and an estimated 63, 142 inmates, security experts are of the view that hiring people through the backdoor might ran counter-productive for the proper management and control of the Prisons, considering that Prisons have had too many jail breaks in recent times.

However, some expressed fears that some jail breaks in recent times could have been made possible through the assistance of individuals hired through the back door to guard such sensitive places, knowing full well that such persons could be susceptible to financial inducement to abate notorious prisoners escaping from the facility.

This is not the first time in Nigeria that a federal government ministry or parastalal would engage in illegal recruitment or recruits large number of staff the system cannot take care of.

During the last Peoples Democratic Party (PDP) administration under former President Goodluck Jonathan, a former Minister of Interior, comrade Abba Moro, was said to have illegally approved clandestine recruitment of millions of Nigerians even though the government made provisions for only 4,000 recruits. During a nationwide selection examination, no fewer than 20 people lost their lives following stampede in some of the centres.

According to a source, two separate lists of names of new recruits were released and they were expected to commence training in Lagos and Kaduna, respectively.

It was gathered that the first list consists of Newly Recruited Assistant Superintendent of Prisons (ASP) and were billed to start training at their training facility in Prisons Training College, at the Maximum Prisons, Kirikiri Town, Lagos.

When contacted, the Public Relations Officer, Deputy Comptroller of Prisons (DCP), Francis Enobore, denied that there was illegal recruitment carried out recently by the Nigerian Prisons. “I am not aware of it. There is no time our training institutions are without trainees.

We are always carrying out training and re-training exercise to keep our men at their best professionally,” he said.

Asked the last time Nigerian Prisons carried out mass recruitment exercise, he explained that he cannot categorically give the exact time and figures involved since he was not in the office but promised to get the details across as soon as he gets to the office on Monday (this week).

DCP Enobore, while making allusion to an online newspaper reports, SaharaReporters, further explained that the list being branded were not true as “they were out to inform Nigerians on what was not true.” While denying the source of the list, he pointed out: “where the list came out from, I don’t know. It was not signed. I implore journalists to find out who signed the appointment letters the alleged recruits are having. As far as I am concerned, there was no recruitment by Nigerian Prisons.”

Speaking further, Enobore reiterated that there is a legal process involved in hiring employees at the NPS. He explained that before NPS can hire anybody “they would need to make their case before the Federal Government, request to declare new vacancies, and have that request approved and made known to the public.”

On the recent jail break at the Kuje Prisons, the image maker of the Nigerian Prisons said there was never a “Jail break at Kuje Prisons. What happened was an escape by notorious kidnappers. What they described as jail break was actually an escape by two prisoners. Jail break connotes violent attack and we never had that at Kuje prisons,” he said.

It was gathered that of the 536 allegedly recruited, almost 400 were from the northern states, living a balance of 136 for other states from the South, East and West.

There have been rising concerns that the speed and manner the APC is working so hard not only to resurrect the comatose PDP but to force Nigerians into yearning for alternative and reliable political platform come 2019 is both numbing and bewildering.

Concerns have been shown that a political party that rode to power on the back of mass support, promising massive job creation for the unemployed and better life for the poor, engages in secret and backdoor recruitment of mostly children of the rich into key government agencies.

First, was in the Central Bank of Nigeria, second, was at the Federal Inland Revenue Service (FIRS), now, it is the Nigerian Prisons Service. There appears to be a hidden agenda of northernisation of the country’s MDAs.