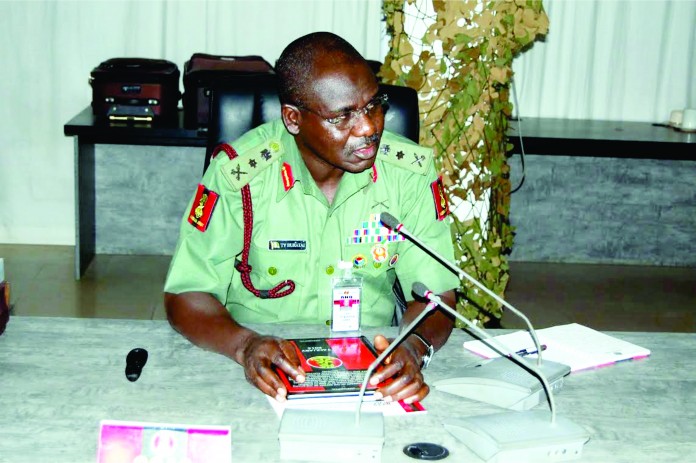 Chief of Army Staff, Lt.-Gen. Tukur Buratai, says the military has entered a mop up phase in the  fight against Boko Haram resulting in the plan to facilitate release of captives, including Chibok girls.

He made the remark in Maiduguri at a meeting with Borno Elders Forum as part of measures adopted to consolidate on the gains recorded in counter-insurgency operation.

The meeting was held at the Military Command and Control Centre in Maiduguri.

“We were given three major tasks and we have made efforts toward achieving two. The first task is to defeat Boko Haram and I want to tell you that as at today Boko Haram has been defeated.

“When I say defeat, it doesn’t necessarily mean that there won’t be hitches here and there. We have entered the mop up stage of our operation,” he said.

He explained that the mop up phase would facilitate the release of those held captive by the insurgents, including the Chibok girls.‎

According to Buratai, the second part of the first task is to rescue those who are held hostage at some marked locations by the insurgents.

Buratai noted that the second major task in the military’s north-east operation was to facilitate the restoration of normalcy in affected areas and provision of relief materials to displaced persons.

He said the military had aided civil authorities in the return of displaced persons from Bama, Gwoza and other communities.

“It has already commenced in places like Bama, Gamboru Ngala, Baga, Mongonu and most of those areas are deserted because they are afraid that they could be attacked.

“So, we will embark on confidence building to encourage them to come back by assisting the civil authorities, he said.

He said some challenges initially encountered in the course of operation had been addressed, stressing that the operation was progressing according to projections.

Buratai acknowledged the support of the elders and urged them and the entire Borno people to be patient with the military particularly on measures initiated to tackle the insurgents.

He said measures such as the closure of markets and curfews were all taken to address gaps observed in the military operation.

Chairman of the Borno Elders Forum, Amb. Gaji Galtimari, appreciated the efforts of the military in containing the menace of insurgency in the north-east.

He said that the military had succeeded in decimating the insurgents to the extent that the regular bomb and gun attacks were limited in parts of the region.

Galtimari said Borno elders were in support of measures adopted by the military in finally ending the menace of Boko Haram and pledged to do more to support the military.

“For the past few months, there has been no issue of bombs except in few cases and around villages surrounding Maiduguri.

“Let me state on behalf of the elders that the indebtedness you people have put on us will only be compensated by the Almighty God.

“We pray that God will help you to complete the work that Borno will return to what it was before the coming of Boko Haram,” he said.