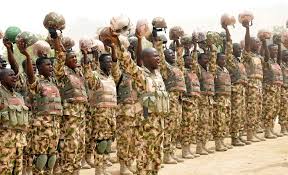 In their effort to boost the morale of soldiers fighting insurgency in the North East and militancy in the Niger Delta region of Nigeria, the Volt club of Children International School Lekki Lagos has made presentation of 3,000 Ziploc care packages to the Nigerian Army.

The presentation took place Wednesday at the parade ground of the 81 Division Nigerian Army Kofo Abayomi Street, Victorial Island, Lagos at a colourful ceremony attended by senior Officers and soldiers who had been in the warfront fighting the insurgency in the North East and militancy in the oil rich Niger Delta.

The coordinator of the volt club Bukky Peters said the 3,000 Ziploc will be given to soldiers serving in 81 Division Lagos, 6 Davison Port Harcourt Rivers State, and 7 Division Maiduguri Bornu State.

According to her, the club made similar donation last year when they made presentation of 1,000 Ziploc to Soldiers of the 7 Division Maiduguri to boost their fighting morale.

They surpass last year’s effort and increase the package to 3,000 and promise to do more with the aim that the Ziploc will get to the hand of all Soldiers serving in the Nigerian Army.
She urge well meaning Nigerians to emulate the gesture and join the team with a view to put a smile in the face of soldiers who left their love ones behind and ensure the safety of the citizenry by protecting the Nation territorial integrity.

According to her the club identifies needs of the society and proffer solutions to them through research.

In his remark the General Officer Commanding (GOC) 81 Division, Major General Peter John Dauke said “There is no doubt that your kind gesture is borne out of deep reflections on our sacrifice in course of our duties of defending the territorial integrity of our great Nation. What you have done is very commendable and goes long way to show that Nigeria is indeed a great country with responsible men and women with great potential” he said.

The army chief added that the gesture would boost troops morale and spur them to do more especially in the fight against terrorism, insurgency and other crimes.

He noted that the Nigerian Army takes special cognizance of the role of youth and children, reason while troops welfare is given utmost priority to ensure their families live comfortably for proper upbringing and education of their children and wards