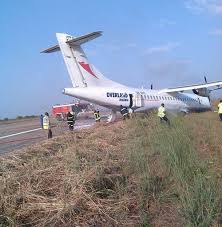 Residents of Ilorin metropolis, Kwara State, were thrown into panic and palpable fear when the training aircraft belonging to the International Aviation College (IAC) crashed at the Ilorin International Airport on Wednesday.

Reports indicate that the Diamond plane with registration Number 5N-BNH which had two pilots on board  crash-landed at exactly 11.05am. Though, there was no casualty.

The plane crash was said to have generated panic at the airport, as well as tension in Ilorin, Kwara State, over the safety of the people on board.

Staffers of IAC, the Rector and some airport workers were said to have visited the scene of the crash which was said to have affected flight operations for about three hours.

Governor Abdulfatah Ahmed of Kwara State was said to have encountered slight delay at the airport on returning from a trip to Abuja while efforts were made to clear the airport.

The International Aviation College (IAC) was said to have reported the crash of the aircraft to the Accident investigation Bureau (AIB).