It is important this Spurs team has silverware to show for its brilliance, says the club’s star forward
Harry Kane acknowledges Tottenham need to win trophies if they are to reflect fondly on this period in their history, even if Mauricio Pochettino has built arguably their greatest team.
Under Pochettino, Spurs have developed into a Champions League regular and finished in the Premier League’s top three in each of the past three seasons.
But Tottenham have repeatedly fallen short of winning a trophy – losing the EFL Cup final in 2014-15 – and the failure to deliver silverware has prompted criticism of Pochettino.
Star striker Kane believes in the quality of his team-mates but also understands they must deliver tangible success.
“A lot of people look at it and say this is maybe the best team we’ve had, maybe the best team we’ll ever have – and the best manager,” he told ESPN.
“But it’s important that we have something to show for it. It’s not just, when we look back in 10 years, ‘we had a great team’. It’s ‘look what they did, look what they won’.
“The challenge for us is can we keep going up and up and up? It’s going to be difficult in the next couple of years with the [new] stadium and the finances.”
The lack of trophies has also prompted questions about Kane’s future, but he feels the club is on the right track and is happy to stay put while that is the case.
He added: “I’ve always said that, as long as the club is moving in the right direction and showing the right ambition, I want to be part of the journey.”
Spurs are currently still in the chase for the Champions League this campaign, as the club is set to face off with Manchester City in the quarter-final round.
In the Premier League, the club sits third in the league, with just found points separating them from sixth-place Chelsea.
Next up for Tottenham is a league match with Liverpool, who currently sit top of the league with a 15-point gap between them and third-place Spurs. 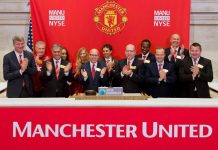 BREAKING: At last, the Glazers are ready to end Manchester United’s crisis