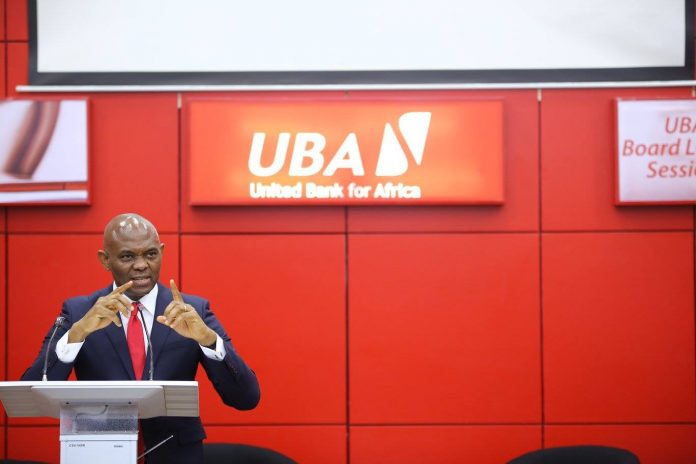 Unarguably the most recognizable financial brand with more footholds across Africa, the UBA story has been brightening the continent with its unique colour, capturing the very essence of Africa’s enduring and enterprising spirit. With its present positioning as a Pan-African bank, UBA Group is at the forefront of driving the renaissance of the African economy.

Not done with its continental expansion, the Bank presently operates in the United Kingdom and France and is the only sub Saharan African bank with a deposit taking license in the USA. It has also acquired a banking license in the Middle East to open shop in the world’s emerging financial centre, the United Arab Emirates.

Another name for the UBA brand is total banking as it provides corporate, commercial, SME, consumer and personal (retail) banking services to more than 27 million customers, served through diverse channels: over 1,000 business offices and customer touch points with 2,669 ATMs, 87,223 PoS, and robust online banking services. Additionally, UBA offers pension custody and related services. Very few financial organisations in Africa can boast of providing such array of service. And doing so effectively.

Africa’s emergence as a developing market of note cannot be complete without the impacts of the versatile customer oriented targeted financial services provided by the UBA Group. This is behind the bank’s offering and proven expertise and capacity in key sectors of economies across Africa, especially in Oil and Gas, Infrastructure Finance, Agric, and Commodity/Export, and these positions us as a preferred partner for structured solutions to key governments and corporates operating in/into Africa. Its activities and cross border operations helped in no small way in highlighting the huge potential that exist in the continent and the need for broader and greater economically interconnected Africa which helped smoothen the way for the launching of the Africa Continental Free Trade Agreement (AfCTA), a development that has further strengthened and positioned the bank as a preeminent financial services provider in the continent.

Buoyed by a specialised business focus aimed at supporting people and businesses to succeed across Africa, Europe, and North America, through its diverse range of financial products and services, UBA’s people centric objective is to help people fulfil their goals and enable businesses to prosper.

Over the years, the above has propelled an approach to business that serves customers not just about profit, but striving to be with them every step of the way in their journey. This has more than any other trait, helped endear the Bank to its numerous clientele base.

The highest currency of any financial institution is integrity, over the years, the UBA Group has grown to own integrity and protection as core values in all business practices. With highly confidential customer transactions, UBA has earned its place in the hearts of millions of its customers.

As an industry leader, UBA’s high-level Enterprise Risk Management System has helped minimise exposure to financial loss in its lending activities, recording one of the lowest numbers continent wide. The full deployment of cutting-edge ICT facilities has enabled the Bank engender a system and processes that are securely designed to ensure maximum protection and minimise losses from fraud and errors for all customers.

Looking at where the UBA Group is today, of how this global bank had a humble beginning in 1949 (73 years) when the British and French Bank Limited (BFB) commenced business in Nigeria as a subsidiary of Banque Nationale de Credit (BNCI) Paris, which transformed its London branch into BFB as a separate subsidiary. Banque Nationale de Credit and two British investment firms, S.G. Warburg and Company and Robert Benson and Company, held shares in BFB.

Following Nigeria’s independence, UBA was incorporated on 23rd, February 1961 to take over the business of BFB. And in 1970, it listed its shares on the Nigerian Stock Exchange and became the first Nigerian Bank to undertake an Initial Public Offering (IPO).

Today’s UBA emerged from the merger of the dynamic and fast-growing Standard Trust Bank, incorporated in 1990, and UBA, one of the biggest and oldest banks in Nigeria. The merger was consummated on August 1, 2005, and was one of the largest mergers completed on the Nigerian Stock Exchange (NSE).

Following the merger, UBA further expanded its brand through acquiring Continental Trust Bank that same year. In 2006, UBA acquired Trade Bank, which was under liquidation by the Central Bank of Nigeria at the time.

The management team under the astute leadership of Tony Elumelu as the Chairman, who also chairs Heirs Holdings, Transcorp and founder of The Tony Elumelu Foundation, UBA has been waxing stronger with greater market share

By leveraging Social media, UBA has been able to help its numerous customers meet their needs and as well solve their problems.

This has continued to further improve customer relations and gives the bank an opportunity to connect with customers leveraging on cutting edge technology.

Of great importance is the fact that UBA uses social media to humanize the brand, through campaigns like ‘This is UBA’. Customers like to feel they know a company, or can relate to it. In fact, UBA pioneered social media based banking platforms with the introduction of Facebook messenger, whatsapp and apple business chat based chatbots for transactions.

The bank also reported earnings per share of N3.39, a 9.35 per cent growth from the N3.10 reported a year earlier in 2020. UBA Plc has almost doubled its profits   in 6 years since hitting N60 billion in 2015 with the profit now touching roughly N119 billion.

The bank’s e-banking income alone raked in N64.60 billion, representing a 46 per cent spike from N44.25 billion in 2020. This suggests that the bank has better utilized the e-banking channels in the delivery of financial services to its customers.

In addition, the group also grew its deposits from customers by a whopping 12.21 per cent to N6.37 trillion while its total assets are now N8.54 trillion. Net assets rose 11.85 per cent to N805 billion.

United Bank for Africa Plc last traded at N8.25 per share and its market capitalization stands at N282.15 billion as at March 4, 2022. Year-to-date performance shows that the share price of the company has appreciated by 2.48 per cent.

UBA isn’t just putting smiles on the faces of its investors but also touching the lives of many others through the UBA Foundation, the Corporate Social Responsibility arm of the Group.

UBA Foundation is committed to the socio-economic betterment of the communities in which the bank operates, focusing on development in the areas of Education, Environment, Economic Empowerment and Special Projects. The UBA Foundation was incorporated in January 2004.

It has the Read Africa program and National Essay Competition which are geared at stimulating the quest for sound knowledge and arming educational institutions with support and resources to meet various learning needs.

There are also several skills acquisition workshops, social, tech and agriculture entrepreneurship forums that promote innovation and advancement on the continent, and several other avenues geared towards giving back to society.

With all these laudable achievements, it has won accolades both at home and abroad.

It was recognized as the African Bank of the year 2021 by the Banker Magazine, a leading global finance news publication published by the Financial Times of London.

UBA’s solid financial performance, its excellent service delivery to customers and its continuous role of facilitating rapid economic growth across the African continent were some of the reasons that led to the bank being named best bank in 12 of its African subsidiaries and in Nigeria.