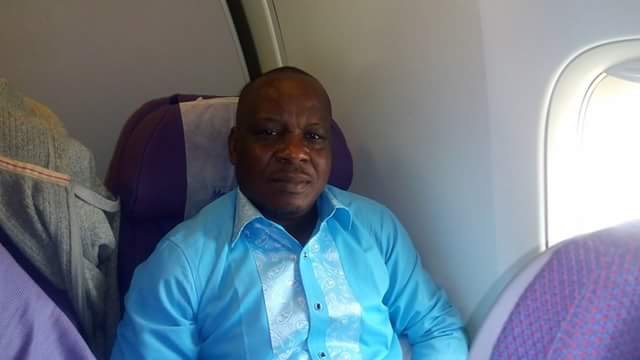 Moses Etu (General Manager) and the Secretary of Warri Wolves obliged to an interview session with ESTHER EGBE. The General Manager talked about issues affecting the club and the league as well. Excerpt.

LET’S have an idea of your educational and sporting background Sir?
I had my primary school in kinkinyiun, a village in Ile Ife and Secondary in Ekiti Baptist High School, Igede Ekiti before proceeding to Adeyemi College understanding Obafemi Awolowo University then for my B. A. In English. Later. N. I. J. Ogba. Delta man. Ile Ife raised, Ekiti groomed and Ondo trained to university graduation before going to Lagos to crown it all.

What prompted you into sports and football management?
Right from my University days, I had always been involved in Football. I played for the school and was reporting Sports for a magazine in the school. I formed A.C. Milan FC in that school. In life, you always aim higher and as a critic, I have been dreaming of managing a club.

Tell us about the beginning?
Albeit to say the past has always been there, but it was Today Sports Newspaper that gave me a break through reporting Sports. My lecturer then, Ojo Olorunleke would always tell us to aim high. He is presently in LASU.It was when Owumi came and I tried to study him and at a time with the way they treated me as a Media man, I made up my mind to give it a try.

Did you ever consider the real action: Coaching, for example? Or was your interest directly into management?
Management even though, I tried coaching when I formed a team in DSC area of Warri some fifteen years ago. I discovered Coaching is not easy and you make much impact in administration

So would you have fired Cooreman, for example, if you were Akwa United’s manger?
Considering the fact that you weren’t very successful as a coach yourself and you concede that it is easier to talk it than to coach it successfully. I would have loved to find out where the problem is by speaking with the players and my officers. I will not tolerate a situation where players betray the Coach like what happened in Chelsea, but if l find out that the Coach is the problem, he has to go.

There is this allegation that the NPFL is for the highest bidder and that club officials prefers to settle match officials than to pay players bonus/salary. This is true or false?
As far as I am concerned, I don’t believe it and will not do it. Where will I get the money from especially when I give report to the Commission? I make bold to say that my players welfare is my priority.
Wolves previously signed a deal with ULO and ZENITH bank, what happen to those deals? We didn’t see much of it manifest.
Both had a deal with my team and there was problem which made them to stop but they have been of great help to us this season. Both of them have come to our rescue this season and we are working on how to consolidate.

Kindly expatiate on the problem Sir?
I’m sure your hands would love to know what went wrong as they were enthusiastic about the prospects offered at its dawn.

What is the management putting in place to settle wolves’ ex-players that are being owed?
It happened last season but I don’t have details and would not want to discuss it in public since we have come together. As regards sponsors, the economic situation is not favorable but our marketing team is working hard. We have our team discussing with Dangote and you can find out. What I can tell you about debt to old players is that of six match bonuses which would soon be paid as soon as fund comes. I am not aware of any other debt based on the papers and documents with me.

Only six match bonuses Sir?
Yes and you can verify this.

Wolves has been managed by 3 coaches already just in a 15weeks old league. Is coaching the problem and if yes, why the choice of a “Foreign Coach?
Our first Coach, Sam Okpodu left because we could not agree on financial terms while Niekentien came on a rescue mission from Delta Stars, Ughelli pending the arrival of a foreign Coach. At the beginning of the season we told those who care to listen that we shall bring in a foreign Coach. Not that we dont believe in Nigeria Coach but we want more than that and in future we will tell the world.

Why is it that Nigeria League clubs chief still find it difficult to follow new trends in football? For example have official kits sponsor that will make replica Jerseys of their club available, generate income apart from collecting allocation from government, ensuring players get their salary in due time, season tickets for fans etc.
As a Media man, it is fun doing your job without tension but as the boss, it is a different ball game. Nobody holds a Media man responsible for poor results but as the boss, you did.Presently, I am the GM but performing the same function. The Delta State Sports Commision came to a conclusion that Commission members should head the clubs namely Chinoye Daphey for Delta Queens, Kuejubola for Delta Stars while Neville for Warri Wolves. I had to shift post but doing the same job. I was fully briefed and no problem.

So effectively, you hold the same office as Paul Bassey in Uyo?
We had an agreement with somebody to do this but he has disappointed us and we have invited him for a meeting.

The final issue is the never ending matter about wolves owing many players who have protested and even reported to FIFA?
Like I said earlier on, I have documents relating with six match bonuses and it would be paid soon. As for any other one, let the person concerned come up with an evidence and we can take it from there. You can imagine a man who came that the club is owing for something but has no documents to back it up. In this fraudulent world, do you believe that.as i am talking to you, we have paid all bonuses for this season and just owing a month salary. We need to maintain these ones and see how we can pay the old bonus. You can verify too. The group is actually trying especially those who have the time but we should be more professional in doing this. My present position has really restricted my performance. The man who is supposed to be our number one did not help matters because with his help and others, the club did not benefit a kobo from the sales of Etebo and he wants us to survive.

Can you explain Sir? Was Etebo transferred as a free agent?
He benefitted a lot. Yes, he was transferred as a free agent because those in charge of the club then knowing that they may not be in charge this season did not take action.
That might be an administrative lapse and poor foresight or misjudgment occasioned by low staff morale. We have since put that behind and it has cost some their job.

That’s not the fault of the fans, or the most enthusiastic wolves fan we have here. Or what do think Sir?
Wolves fan assisted and encouraged Etebo to deny Wolves. The club that made him not .Keep the flag flying and work hard. Dig more facts and not be biased in their judgement.