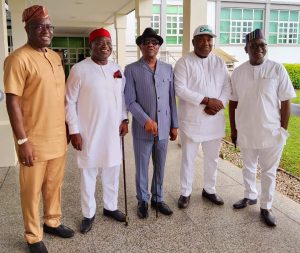 Governor Nyesom Wike of Rivers State and the other four governors, constituting the G-5, in the Peoples Democratic Party (PDP) demanding the resignation of the PDP national chairman, Iyorchia Ayu, after the emergence of former Vice President Atiku Abubakar as PDP presidential candidate for the 2023 elections,  on Sunday converged at the Government House, Enugu, where they held a closed-door meeting.

The G-5 led by Governor Wike, were received at the Akanu Ibiam Airport by Governor Ifeanyi Ugwuanyi of Enugu State.

The G-5 and other allies had declared not to participate in the presidential campaign of the PDP.

I am strong and healthy, Tinubu replies critics (Video)