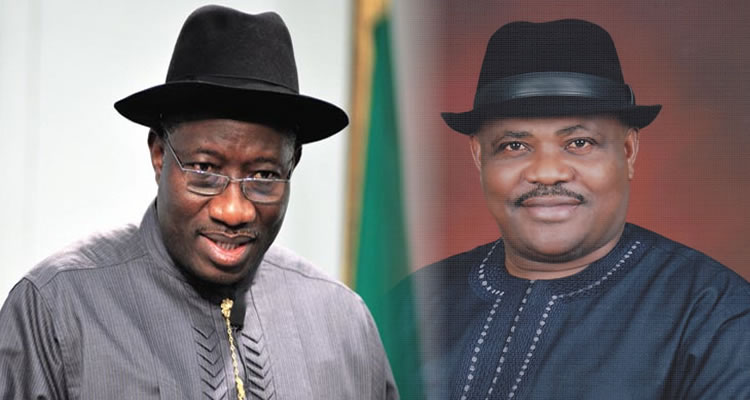 Share this on WhatsApp
Spread the love
Governor Nyesom Wike of Rivers State has reaffirmed his loyalty to former President Goodluck Jonathan. In demonstration of his loyalty, Governor Wike gave former President Jonathan the honour of commission completed projects in Rivers State.
In apparent response to the criticisms of Governor Seriake Dickson of Bayesla State, Wike was of the view that those attacking the former leader need their heads examined.
Governor Seriake Dickson of Bayelsa State had said that the six years former President Goodluck Jonathan spent as president was a wasted opportunity for the Ijaw people,
Wike had made the remark while former President Jonathan commissioned the second phase of Nkpogu Bridge constructed by his administration.
“We decided that you (Jonathan) should come, so that you will know that as those you gave support, we have not abandoned you and we will not abandon you. We are not like some politicians who, when anything is wrong, will begin to sing a different song. Rivers State is a different place. When we believe in you, we believe in you and that is our life. We are different from other Niger Delta states. We can say it with all authority, we are different. We cannot come out in the public and begin to castigate our own. We will not do that. Those of them who do that should go and have a rethink. Doctors should go and examine them whether they are well or not,” Wike had declared.
ALSO SEE: Jonathan-PDP peace process collapses
Former Jonathan, at the occasion, had commended the efforts of Governor Wike in the development of Rivers State, expressing that he has “no regrets that Governor Wike is the Governor of Rivers State.”
He “I am happy that the governor has opened up Rivers State through projects. He has shown so much commitment to infrastructural development. The whole of Rivers State is now a construction yard,” Jonathan had declared.
Wike was gathered to have criticised President Muhammadu Buhari-led All Progressives Congress (APC)- Federal Government for apparently failing to deliver on its campaign promises two years into its administration.
“The party in power told Nigerians that if they were voted in, they would make N1 to be equal to $1. I hope that Nigerians now see that N1 is equal to $1. Is that correct? They said they will make sure that everybody gets employment. I am sure that some of us who are here have all gotten employment. They said that they are going to make life better for Nigerians I hope that we are no longer dying of hunger,” the governor had remarked.
Share this on WhatsApp
Related Topics:former President JonathanGovernor Nyesom WikeGovernor Seriake DicksonPeoples Democratic Party (PDP)Rivers State Govt.
Up Next