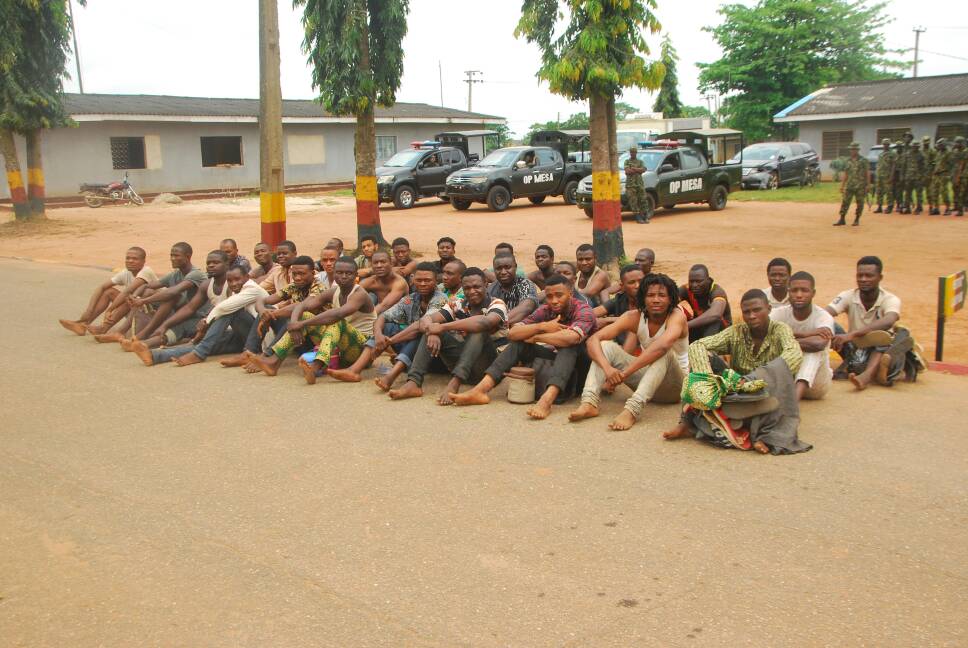 Nigerian Army says on Tuesday that several criminal gangs have been arrested in the ongoing Operation Crocodile Smile 2 in Lagos and Ogun states respectively.

National Daily learnt that some of the suspected criminals were arrested across the eight sectors of the operation for drug peddling, cultism, pipeline vandalism and car snatching.

It was learnt that the criminal elements were hunt down through patrols, raids, road blocks and checkpoints. 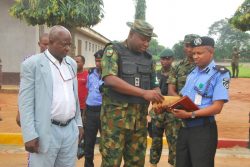 Handing over of 36 suspected criminals to NPF by sector 3 Commander Lt Col B. C . Eze.

Col Daudu revealed that based on credible  information on the activities of pipeline vandals at Ronik Hotel Agbule Egba area of Lagos state, troops of 149 Battalion, 81 Division Nigerian Army were dispatched for a “Cordon and Search Operation” in the general area.

During the raid, the troops were said to have arrested suspected pipeline vandals and the recovery within the hotel premises of 16 loaded kegs of Premium Motor Spirit (PMS), five cars and two tankers loaded with PMS.

ALSO SEE: Six behind bars in Ekiti for alleged cultism

In consonance with the synergy existing among the sister services, the suspects were interrogated, profiled and handed over to Nigerian Security and Civil Defence Corps (NSCDC).

Suspected vandals caught during the operation

However, during a stop and search carried out by troops of the 174 Battalion, 81 Division Nigerian Army; arrested a car robber who had snatched a Toyota Venza with Registration No: FST 762 CV along Ikorodu – Sagamu road.

The suspect, it was revealed, was fleeing with the stolen vehicle before he rammed into other vehicles and pedestrians in a bid to escape and was thereafter arrested by troops. The suspect and the recovered vehicle were later handed over to Owutu Divisional police Headquarters.

Operation Crocodile Smile 11, which was flagged off at Takwa Bay Island by the Chief of Army Staff, Lt Gen Tukur Buratai last Friday led to the arrest of five drug peddlers with gallons of unidentified chemical substances and Indian hemp.

National Daily was reliably informed that the arrest followed an intelligent report by troops of Sector 5, 243 Battalion at Agbara area of Lagos State in conjunction with men of NDLEA carried out a raid operation at Oto-Awori. 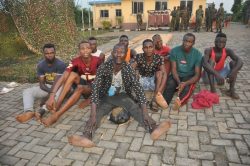 Similarly, raid and clearance operations were carried out on 14 October 2017, by troops of 65 Battalion Sector 1 of Exercise CROCODILE SMILE II at Ajah general area.

“Nine suspects were arrested with bags containing Indian hemp. Two of the suspects were alleged to have snatched a female purse containing Samsung Galaxy and Itel phones, Holy Bible, house keys and N1,200 and the items were, however, recovered by the troops. 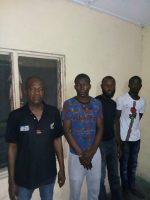 The suspects, it was gathered were later handed over with the exhibits to Lagos State Special Task force, Oshodi.

As the operation is spreading its tentacles penetrating into the hinterland and raiding every identified hotspots, it was learnt that last Sunday, the Commander, Sector 3 of Exercise CROCODILE SMILE II, Lt Col BC Eze handed over 36 suspects arrested by troops of the Sector during a raid operation at criminal hideouts and notorious drug dens in Ikorodu general area.

The handing over was carried out at Odogunyan barracks in Ikorodu, had the suspects handed over to the Area Commander, Nigeria Police Ijede – Ikorodu.

Also arrested were some cult members who were said to have attacked Rolex Hotel in Ajara area of Badagry.

Col Daudu reiterated that a distress call to the troops of “243 Battalion Sector 5 led to the decapitation of four suspected cultists.”

As the Operation Crocodile Smile 11 continues, the authority of 81 Division Nigerian Army reiterated that the troops would continue to maintain peace and security in the entire Lagos and Ogun State.

The army urged members of the public to cooperate with security agencies by remaining law abiding and giving credible information to the nearest security check point for prompt attention or call 193 and other dedicated telephone numbers.