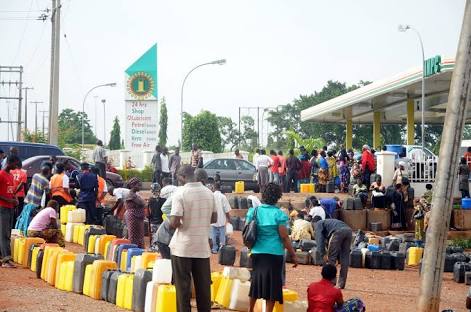 A year after the partial liberalization of Nigeria’s fuel market, another crisis may be brewing in the sector as fuel marketers have stopped the importation of fuel due to huge debts owed banks, leaving just the Nigerian National Petroleum Corporation (NNPC) to import the over 90 per cent of the country’s fuel need, National Daily findings has revealed.

The marketers, National Daily gathered, are also complaining of the scarcity in foreign exchange, increased in crude prices, which they claim have made it unprofitable to import petrol and sell at N145 per litre.

The Managing Director, Heyden Petroleum Limited and Chairman, Depot and Petroleum Products Marketers Association, Mr. Dapo Abiodun, said when the price band of N135 to N145 was introduced last year, crude oil price was around $35 per barrel and the exchange rate pegged at N285 to a dollar.
He said, “The price of crude has moved up; the exchange rate has increased to N305/$; however, the petrol price band remains unchanged.”

He said marketers continued to import and their margins began to shrink, adding that they stopped importation when it became unprofitable.

Abiodun said, “Today, marketers own banks over $2bn. There is hardly any bank in Nigeria today that is advancing credit to any marketers. Today, the NNPC is warehousing subsidies plus the inefficiencies associated with the operations.”

According to the Chairman, Petroleum Downstream Group, LCCI, Mr. Ken Abazie, the present situation is not normal and unsustainable, adding that it is no longer profitable to bring in petrol and sell at the current N145 per litre.

Reacting to the situation, Minister of State for Petroleum, Dr. Ibe Kachikwu at the 2017 first Business Clinic of the Petroleum Downstream Group of the Lagos Chamber of Commerce and Industry, noted that the downstream sector witnessed increasing gaps in product supply in the first and second quarters of 2016.

He said the non-availability of forex and the inability of marketers to open letters of credit had force them to stop importation. Dr. Kachikwu said the NNPC was forced to take up the obligation of providing more than 90 per cent of the domestic requirement to cover the demand for petroleum products.

Kachikwu said, “Again, we are back to the situation that we were last year. Today, the NNPC has gone back to importing about 95 per cent of products to ensure stability. In fact, through the months of December, January, February and most of March, we did a 100 per cent for the market. We have seen two windows for private importation in the last four weeks.

The Federal Government had on May 11, 2016 increased the price of Premium Motor Spirit (petrol) to N145 per litre from N86, putting an end to fuel subsidy to marketers.

And for a while now, the NNPC has been absorbing some of the cost implications resulting from the increase in crude oil prices and the current price ceiling of N145, which many marketers as unrealistic, at the pump for the PMS.