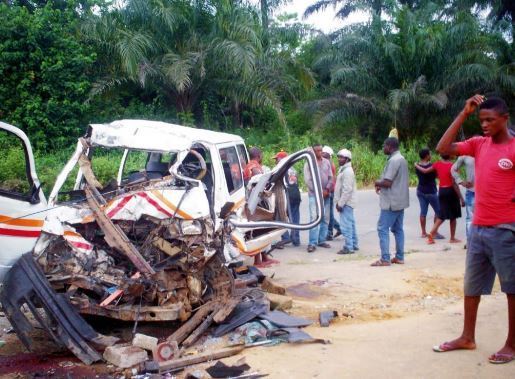 Reporters reliably gathered that the victims included three males and four females, while the injured were 34 adult females and 24 adult males. Among the injured were 12 children, including six boys and six girls. The Federal Road Safety Commission, FRSC, Sector Commander, Kwara State, Uchechukwu Wihioka, while confirming the incident, said the crash involving Toyota Dyna with number plate FA 655 NAS and Toyota Hiace with number plate LSD 919 SR, was caused by dangerous driving and wrong overtaking. The FRSC boss, who said: ”The driver could no longer control the vehicle after finding himself in the dangerous condition, and, therefore, flung his passengers in different directions on the road. “

He, however, said the rescue team, comprising FRSC officials and policemen, came to the scene on time to render necessary assistance. Wihioka cautioned commercial drivers among other road users to always drive with caution and charged passengers to drive along with commercial drivers, so that they could caution them when driving recklessly. He said the passengers have the right to do that, adding that lives would be saved when everyone was involved in road safety.