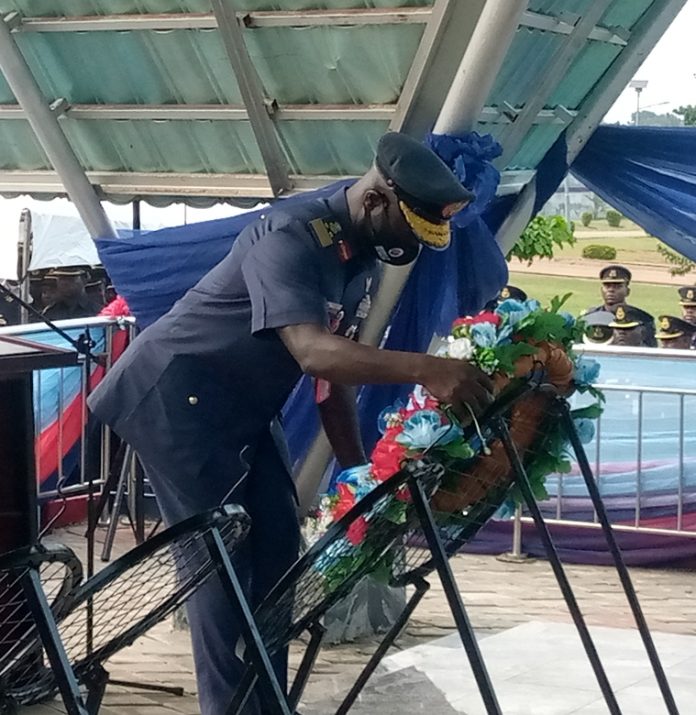 The Armed Forces Command and Staff College (AFCSC), on Sunday, held a memorial service for the 165 military officers who died in a plane crash in 1992 at Ejigbo on the outskirts of Lagos.

The National Daily recalls that Nigeria Air Force C-130 plane crashed on Sept. 26, 1992, killing all the passengers and crew members.

This is the fourth year the College is observing a memorial ceremony in honour of the 165 deceased officers.

In his remarks, Commandant of the College, AVM Ebenezer Alade, said it was with heavy heart that they remembered the fallen heroes.

He said the unfortunate incident brought to an abrupt end, the lives of promising officers, with very bright future in the Armed Forces, lamenting that the nation lost a generation of middle level officers.

“It was in service to the nation that these noble officers and men that we remember today left the comforts of their homes and units after posted to serve in the college as well as being nominated to attend Senior Course 15.

“The world will not remember for long, the words we say here today, but will forever remember the price paid by the beloved officers and men,” he said.

According to him, the College has erected a befitting cenotaph, with the names of the fallen heroes, where their families can visit to remember their loved ones.

“This is to ensure that their names are not forgotten in the history of the College,” he said.

Earlier, the Deputy Commandant of the College, Rear Adm. Patrick Nwatu ,said among those that lost their lives were officers from the Republic of Ghana , Tanzania ,Uganda and Zimbabwe, as well as a students of Nigerian Military School, Zaria.

In her remarks, Mrs Stella Onabolu, wife of one of the deceased officer, thanked the Armed Forces Command and Staff College for remembering their husbands in a grand style.

“They died for the nation, and the nation is remembering and recognising them despite having died 29 years ago,” she said.