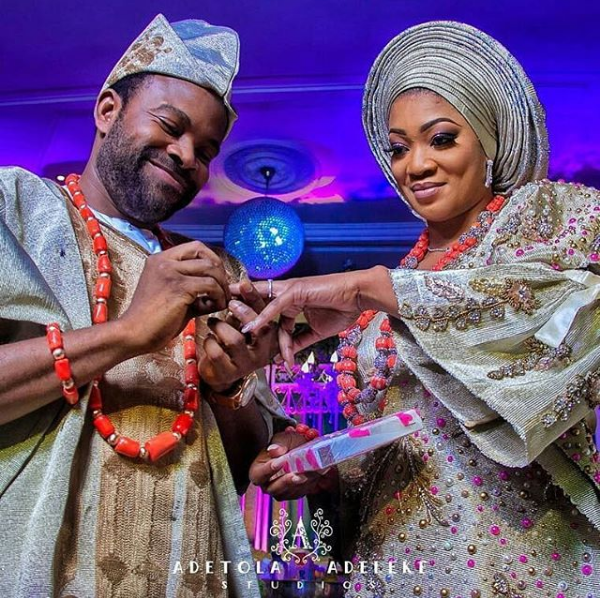 Popular Nigerian artiste and musician, Gabriel Afolayan has gotten married to his heartthrob Banke, in a traditional wedding ceremony on the 5th of April, 2018.

The exquisite traditional wedding ceremony, took place in Oluyole Ibadan and it was attended by lots of celebrities in the Industry. Celebrities including, Tunde Demuren, Sunday Omobolanle, Banky and Adesua Wellington, Kunle Afolayan, Adeniyi Johnson, Mocheddah, Wole Ojo, Moji Afolayan and a host of others.

Gabriel studied Theater Arts at University of Ibadan. He is part of the renowned Afolayan entertainment family that comprises Ade Love, Kunle Afolayan and Aremu Afolayan. As an actor, he won the Best Supporting Actor award for playing “Tavier Jambari” in Hoodrush (2012). As a musician, he is known mostly for “Awelewa” and “Kokoro Ife”. In an interview with The Punch, he described his musical genre as “Love ballad”. Afolayan’s acting debut was in F Opawon by Baba Sala. In an interview with Nigerian Tribune, he stated that his music career started in 1997, while he was part of a group in Ibadan. He also stated that he has always been part of the choir. He has cited 2face, Banky W., Aṣa and Bez as influences.

Share this on WhatsApp
Related Topics:Gabriel AfolayanIbadanOluyole Ibadan
Up Next

Black Panther reaches another milestone in the movie industry

Funke Akindele has a legitimate reason to flirt