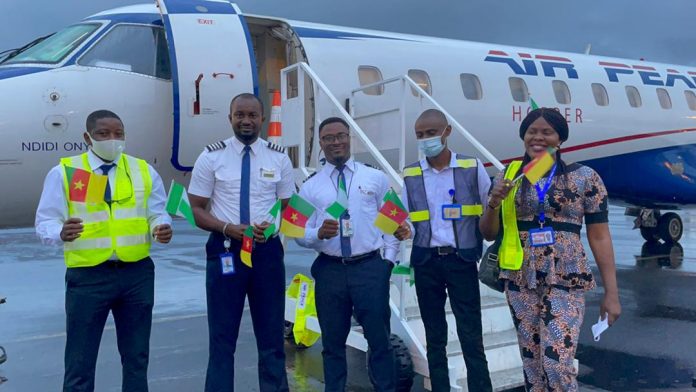 Share this on WhatsApp
Spread the love
The Consul-General of Nigeria in Duoala, Cameroon, Mrs Efe Alexandra Clark- Omeriu, says the operations of Air Peace into Cameroon will attract more economic development for both countries.
Clark- Omeriu said this at the ceremony for Air Peace’s inaugural flight to Cameroon on Thursday amidst fanfare.
The National Daily reports that the inaugural flight with registration number P47528, departed the international wing of the Murtala Muhammed International Airport (MMIA), Lagos at 3.45 p.m, touched down at about 6.54 p.m and was greeted with a water cannon in Duoala.
The Consul-General said that the airline’s operations into Cameroon would fast track bigger trade investment for both countries.
She added that this would also boost tourism, greater opportunities and employment.
According to her, the inaugural flight is a beautiful thing that has ever happened to both countries.
“This is also a win-win situation for both countries because Nigeria and Cameroon are brothers.
“The number of Nigerians that reside here in Duoala alone are over three million and majority of them are traders.
Clark- Omeriu said that the flight would also reduce the pains of flying through long routes to Addis Ababa, Ethiopia to connect Nigeria.
“We have our own Air Peace that flies straight and direct from Nigeria to Cameroon to ease the stress of going through roads and water,” she said.
Earlier, Mr Adeyemi Ayodeji, the Ground Operations Manager, Air Peace said the airline was committed to excellence and that the management had brought the excellent service to Cameroonians.
Adeyemi said that the airline had recorded tremendous feats in just seven years.
According to him, the airline now operates 19 domestic routes, six regional routes and two international destinations (United Arab Emirates and South Africa) with a varied fleet of 28 aircraft, including three ultramodern Embraer 195-E2 airplanes.
“I feel excited that today, Air Peace, West Africa’s largest carrier, is making its entry into Cameroon from Lagos, Nigeria.
“We are delighted this launch is happening as we believe both countries will benefit enormously from it in the areas of employment creation, promotion of tourism, facilitation of a seamless movement of people and other forms of economic value.
“Air Peace is famed for its no-city-left-behind initiative, which is driving our route expansion.
“The extension of our wings to Douala is resultant from our vision to create affordable and safe air travel for Africans, with our signature hospitality, connecting various cities across Africa, especially the West Coast, thereby fostering socio-economic integration,” Adeyemi said.
He said that plans were in top gear for other international routes, such as Houston-USA, Mumbai-India, Guangzhou-China and London.
“We are constantly reviewing our route network to reflect the needs of the flying public.
“Finally, we thank and pledge to work with all the stakeholders including the Cameroon Civil Aviation Authority, the Nigerian Civil Aviation Authority, the airport administrators and, of course, the governments of both countries to ensure the new route is maximised,” Adeyemi said.
Mr Bathlome Okwujaku, President, Nigeria Community in Cameroon, commended Air Peace for bringing its operations to Cameroon.
He said that the flights would attract more investment in the country and boost Nigerian investors trade.
Okwujaku said that airline would ease cost of travelling into the country and also reduce the high risk associated with traveling through roads and sea.
“Before now, businessmen in Cameroon were faced with the challenge of travelling but today Air Peace has made it easier to travel without going through Addis Ababa.
“This will bring more economy development for both countries and also enhance business opportunities.
“This is what we have been hoping for and now that Air Peace has come to Cameroon, we are going to ensure that all Nigerians here fly Air Peace,” he said.
He said it was great the airline had come to bridge the gap between both countries at this crucial time in terms of connectivity.
Share this on WhatsApp 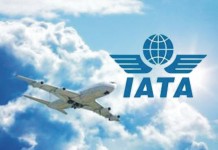 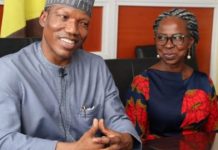