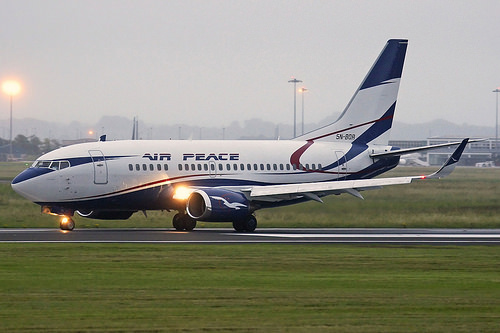 Nigeria’s South-East and South-South economies are about to explode as Air Peace, Nigeria’s emerging air giant, is sets to start flight operations from Enugu to farthest lands in the US (Atlanta), India, South Africa and China. According to reports, the airline will begin International direct flights from Akanu Ibiam International Airport Enugu to Dubai, Mumbai, Johannesburg, Atlanta and Guangzhou.

The Chief Executive Officer of the airline, Allen Onyema, disclosed this at the Enugu Investment Summit holding in Enugu, South East Nigeria.

The airline announced that the Akanu Ibiam International Airport, in Enugu will be its hub airport adding that all direct flight and maintenance will take place in Enugu.

Mr. Onyema told the summit that cargo flight operations from the airport in Enugu will commence immediately while flights to China will start very shortly.

International flight operations began at the airport in August 2013, under Stella Odua as the minister for aviation, with the Ethiopian airline operating the only flight from the airport.

The commencement of direct international flights from the airport by Peace Air, to the US, India, South Africa and China, is considered as a massive boost to the socio-economic status of the South Eastern part of Nigeria.

The airline would also lay the foundation for the entrenchment of peace, the development of the aviation sector and would end the level of animosity amongst operators, Onyema said.

“The era of devilish competition and devilish envy in the aviation industry in Nigeria should remain in the past,” he said during the launch ceremony in Lagos.

He said with seven aircraft all named after his family members, the airline has gone a step further in ensuring safety by contracting one of the world’s best maintenance organisations, BT Aviation Maintenance Company in the United Kingdom.

“To ensure that nothing is left to chance, we have also equally signed a Powered By Hour (PHB) contract with the world’s biggest PHB vendors, AJ Walter of United Kingdom for supply of aircraft spares,” Onyema said.

Meanwhile, Air Peace has also signed a five year contract with Canada’s Flyth Solutions incorporated for the installation of Automated Flight Information Reporting System (AFIRS) on all his aircraft for flight tracking and engine trend monitoring.

The airline came on board with an unparalleled safety consciousness second to none, guaranteeing the satisfaction of travelers across the Globe! With fleet which consists of state of the art Dornier 328, several Boeing 737-500 SP (special performance) and 737-300 jets, travelers can be rest assured that their journeys will feel like holidays be you on vacation or a business trip.

All Aircraft are equipped with Automated Flight Information Reporting System (AFIRS 220) geared towards safety. This equipment is manufactured and installed on all the planes by Flight Aerospace Solutions Ltd (FLYHT) of Canada. FLYHT has a 5year contract with Air Peace to this end.