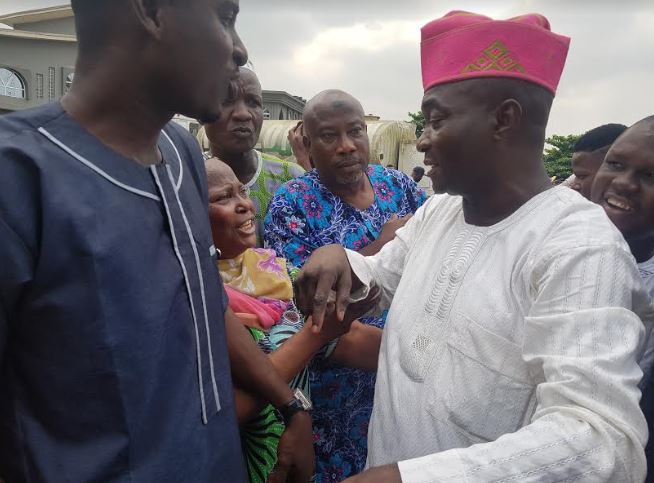 By Olanrewaju Adesanya
The election of the House of Representatives member representing Ajeromi/Ifelodun Federal Constituency in Lagos, Hon. Kolawole Taiwo has been upheld by the state’s House of Representatives Election Petition Tribunal sitting in Ikeja.
Chairman of the Tribunal, Justice Hamidu Kunasa dismissed the petition challenging Kolawole’s election by his opponent from the Peoples Democratic Party (PDP), Hon. Rita Orji.
The tribunal upheld the cancellation of the 23rd February, 2019 election by the Independent National Electoral Commission (INEC), and the declaration of Hon. Kolawole Taiwo as the winner of the rerun election that took place on 27th April.
Justice Kunasa said that the basis upon which the petitioner, Hon. Rita Orji premised her petition was largely not valid, citing the fact that INEC acted within the confines of the constitutional frameworks in both the election of February 2019 and the consequent supplementary election held in April 2019.
He also faulted the petitioner, who took the matter to a court in Kubwa, Abuja, saying that this was really a preserve of the tribunal, adding that “Kubwa court’s ruling is not binding on this court, we have the jurisdiction on the matter.”
The tribunal also discountenanced the petitioner’s call to be declared the winner of the election, adding that the grounds of her argument were of no value.
The first respondent, (INEC) was also absolved of any involvement in corrupt practices in the conduct of the elections.
According to Justice Kunasa, the petitioner failed to prove any of the three counts, so the tribunal upheld INEC’s decision to declare Hon. Kolawole Taiwo as the validly elected member of the Federal House of Representatives from Ajeromi Ifelodun Federal Constituency.
Speaking after the judgement was delivered, INEC’s counsel, Mr. Tijani Ishola expressed confidence in the decision of the tribunal.
“The laws are very clear with regards to election petitions and it is the duty of any party who alleges to prove his case and when you listen to the judgement from the beginning to the end you would see that we were vindicated.
“The tribunal has done justice by resolving all issues raised by the petitioner and the respondents and the beauty of the election petitioner in this case is that they look at the facts on ground and facts adduced by the party, so that at the end of the day, every party involved will believe strongly that justice has been done.
“In this case, although it took us a long time, we are happy today that we are having the day and regardless of where the pendulum is swinging, judgement has been done,” he said.
In his comment after the judgment, Hon. Kolawole Taiwo stated that he was filled with joy that the case was laid to rest, and that better part of his time could now be devoted to true representation of his people at the green chamber.
“I give thanks and adoration to God, to God be all the glory and I want to thank the judiciary. This is my first time of having to face the judiciary after an election and I just need to thank them for being the last hope of the common man, I’m so happy and I thank my people.
“I also want to extend my hands of fellowship to my opponent that she should let us stop all these acrimony about one election.
“When I lost election in 2015 so many people came to me that I should go to the tribunal and that I would get my mandate back, but I refused.
“Today I have passed through the tribunal and I give all thanks and adoration to God but I have stretched my hands of fellowship to them, let’s think more about Ajegunle.
“This is the time for us to build our own constituency, it is an important time for reflection. There is time for everything; a time for election, a time to complain, a time to sow and a time to reap, this supposed to be a time for us to reap and stop sowing.
“I need to concentrate on what I was sent to do at the National Assembly. I come to the constituency every week, and I spend N100,000 on transporting myself to and from Abuja and Lagos every week, which means I spend not less than N400,000 on flight in a month. That is money for transportation not the one I will spend,” he said.
The lawmaker then charged all parties to collaborate for the advancement of a glorious Ajegunle.
“I have met with several ministers, I have met with several heads of parastatals. I made them see the reason they should support us, that we are the down trodden, that we are poor.
“I represent poor people and any time I speak in the House, after introducing myself as Honourable member representing Ajeromi Ifelodun, I will put Ajegunle there and I told them that I do that because I want to always show them that I represent the poor and the downtrodden.
“We may be poor, we may be downtrodden, but we are not stupid, we have what it takes to develop our nation and that is what we are taking to Abuja and I have assured my people continuously. I told them that they should give me one day and I am going to give them four years, since then I have been working, I have not relented,” he added
He said that after he learned that the judgment would come up on Monday he warned the residents of the area that it would bring joy and sorrow, and that those that tasted any of the two would react differently, but that those who taste joy you must be magnanimous in victory, while those who would taste sorrow should not be violent.
“We want to be magnanimous, we want to stretch our hands of fellowship to all of them. Ajegunle is not about thuggery, it is not about gun, Ajegunle is about talents,” Taiwo said.