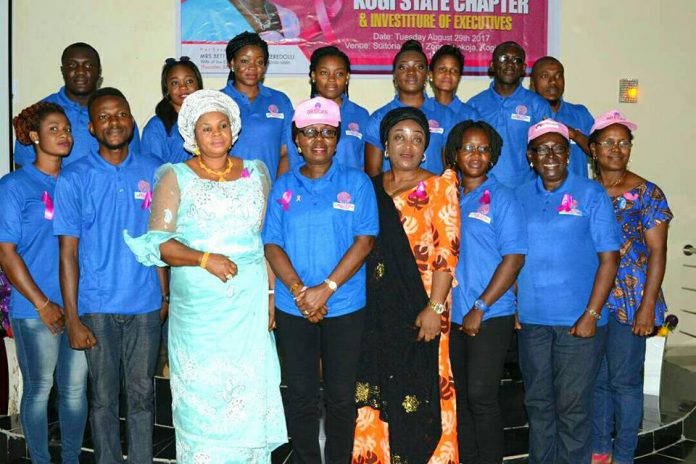 Share this on WhatsApp
Spread the love
In pursuit of a healthy life for the Nigerian women, Wife of Ondo State Governor, Arabinrin Akeredolu has extended her scope by officially launching the Kogi State Chapter of Breast Cancer Association of Nigeria (BRECAN).
Mrs Akeredolu while unveiling the Kogi state BRECAN enjoins everyone embrace the concept by joining effort to spread the awareness about breast cancer so that no woman in Nigeria would needlessly die of the disease.
Speaking in the State Capital Lokoja, the wife of Ondo State Governor, urged women to be aware of the symptoms of disease and take active steps in preventing it.
She called for the support of Kogi State Government in the fight against the disease, stating that awareness is key in stemming the deaths recorded due to breast cancer.
The Kogi State Governor, Alhaji Yahaya Bello while receiving the BRECAN team who paid a courtesy call to his office, was counseled by the Ondo First Lady to set up breast cancer treatment centre in Kogi state.
“Victims of breast cancer most times go to University College Hospital (UCH) Ibadan and other hospitals outside the state, I see no reason why you cannot have your own breast cancer clinic in the state. Having breast cancer clinic in the state will go a long way to debunk the misconception about the disease because victims can easily be directed to hospital for treatment.
“We need your support in providing infrastructures like mammographic machine that helps to pick breast cancer at the earliest stage when no one can actually feel that the lump is there.
The Mrs Akeredolu and founder of BRECAN further stated that “One major barrier to promptly address breast cancer is financial challenge. When victims of breast cancer cannot afford the treatment, they are made to believe that it is a spiritual attack and get directed to prayer mountains but, if there is breast cancer clinic in the state, they will be able to access it, get treated and pass the message of hope across to others that breast cancer can be treated.
“We want you to make breast cancer awareness and treatment a priority so that women will not continue dying needlessly.” 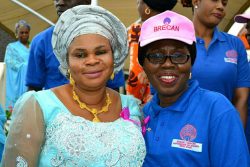 In his remark, Governor Bello appreciated the Ondo State Government for the hospitality given to Kogi State indigenes who resides in Ondo State and commended the unrelenting efforts and passion of Arabinrin Akeredolu in the fight against the disease, breast cancer and promised his support to the fight against the disease.
ALSO SEE: Tsav calls for caution in handling allegations against IGP
“Every human being should rise against breast cancer because when you save woman, you save a nation”
The Governor assured that everything will be done to ensure that the project record a huge success in the state.
In her own remark, the National President, BRECAN, Mrs Juliet Ogbogu, xplained that the aim of establishing BRECAN in Kogi State is to make sure that women of the State did not die of the disease in their productive age.
“Public awareness of the disease is very important. We create awareness about breast cancer through activities like The Jog for Life and World Cancer Day among others”
The guest speaker, Dr Wuraola Ipinyomi, observed that Nigeria has the highest cancer death rate in Africa due to lack of awareness, lack of infrastructure like mammographic machine in hospitals, financial challenge,superstitious belief among others.
While appealing to people to live a healthy life, she cautioned against some of the causes of cancer to include obesity, sedentary life style, highfat, cholesterol diet, dietary iodine deficiency, environmental factors among others.
Dr Ipinyomi called on government to come to the aids of the victims of the disease by prioritising cancer treatment across the country to stall the unwarranted death of women attributed to the disease.
She also stressed the need for women to check their breasts monthly after mensuration as early detection remains the solution.
Share this on WhatsApp