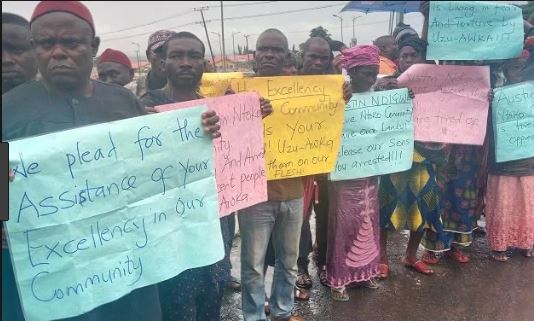 The people of Ochuche Umuodu Community in Ogbaru local government area of Anambra State on Thursday blocked the Government House in Awka to protest alleged imposition of traditional ruler on the community by the government.

They stormed the government house in their numbers with different placards bearing various inscriptions, led by Chief Fred Aniche (Ajie of the community)

Some of the placards read: “Obiano stop destroying our cultural heritage, Anambra cannot impose anybody on us, we do not want Osita Ijoma, we want Dr Steven Akpati, Obiano, we need peace and Obiano you must do the needful “among others.

Spokesman of the community, Chief Fred Aniche, said Ochuche being a peaceful community, would not want anyone to bring war to them because of traditional stool.

He warned if nothing not done to correct the anomaly, they would no longer stop the youths to carry out what they wanted to do in the area.

According to him: “The rightful people of Ochuche Umodu Community are greatly saddened by the unilateral and precipitous decision and actions of the Anambra State Government to recognise Mr Vincent Osita Ijomah as the “Igwe” of Ochuche Umuodu on 4 July 2019,  despite our collective protestations  and  representations  to  the Government, directly and through the Igwe Roland Odegbo panel”

“We hereby serve .notice that as law abiding citizens, we shall seek redress following due process and in the Court of law.

He added:  “By this petition, Your Excellency, we wish to aver that you have been grossly ill-advised on this matter, by a cabal, working with Mr Arinzechukwu Awogu, the Transitional Chairman of Ogbaru Local Government, whose interest is to foist disorder in our community with the support of external interests in and outside Ogbaru community”

“The Panel you set up, evidently from their predisposition, body language and haste, seemed to have been empanelled to rubber stamp a premeditated outcome. Regrettably, these actions will only tarnish your legacy as a State Governor.

“By practice and convention, the issue of the selection of an Igwe for our community resides fully and totally on “We the People of Ochuche Umuodu.

“And for the record, the majority of the law abiding people of our Community did not put forward, canvas or select Mr Vincent Osita Ijomah as our Igwe.

“For the record, we the people of Ochuche Umuodu have duly and of our collective volition selected HRH Dr. Stephen I. Akpati, as our Igwe, and advised the government accordingly.”

Obiano, who was represented by his Special Assistant on local government matters, Mr Gerald Akaeze, said the community should maintain their peaceful deposition.

He commended them for not taking the part of violence, adding that his administration would always stand on the part of peace.