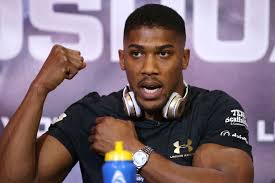 The world heavyweight star , 28, is now worth £ 35m and is ranked the fifth richest young sports star in Britain.

British- born Nigerian Joshua has won 20 of his 21 professional fights by a knockout and his wealth has risen by £ 20m since 2016 .

His agent, Barry Hearn , has boasted that Joshua will become the first billionaire boxer .
“His commercial potential outside the ring is huge, way beyond Beckham and the world ’ s top footballers , ” Hearn said .
“ He has a much bigger cross – over in terms of potential . ” Joshua is forecast to rise up the rankings next year .
National Daily learnt that Joshua is ready to sign a new three- year deal with Matchroom which will earn him an astonishing £ 100 m ,a staggering $ 1 bn deal with sports streaming company DAZN, whose budget for boxing is bigger than American giants HBO and Showtime combined .
Hearn , 69, said , “Anthony is an astute young man and he knows what Matchroom has to offer him when his contract runs out in November.

“ To start with, Anthony is signed to the biggest and best promotional company in the world. We have the financial clout to make sure the big fights can go ahead at the big venues.

Share this on WhatsApp
Related Topics:Anthony Joshua
Up Next