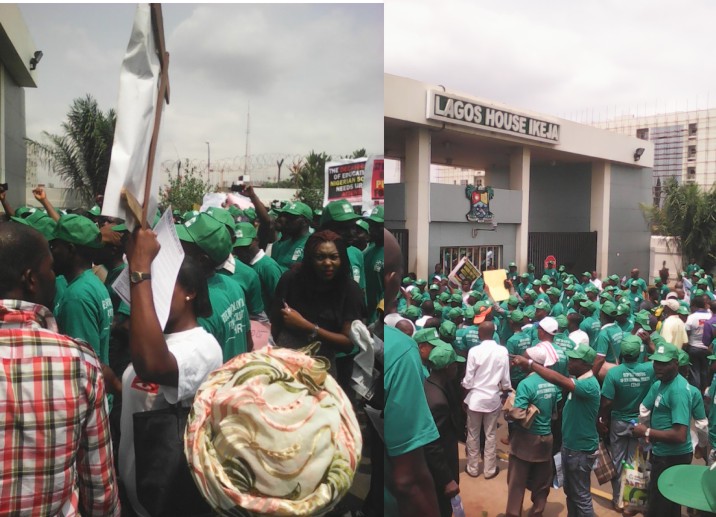 By Lanre Adesanya and Osifo Godsfrey

The Committee for the Defence of Human Rights (CDHR) has frowned at the blatant fleecing of nation’s treasury by public officials at the detriment of the masses, noting that the anti- corruption war embarked upon by President Mohammad Buhari can only be fruitful if centered on betterment of ordinary Nigerians.

The stance was communicated in a joint protest, staged by the CDHR, Coalition Against Corrupt Leaders CACOL and Academic Staff Union of Universities, ASUU to the Lagos House, to drum home its resolve to ensure government gives a fair deal to the masses who are the source of resources at their disposal.

Barrister Malachy Ugwummadu, National Chairman CHDR posits that the Governor need attend to them as they were the ones who elected him to occupy the seat.

Infuriated by the fact that the Governor Mr. Akinwunmi Ambode was not able to personally address the teeming group,who voted him in and on whose rollercoaster he now rides and had his go at the state’s treasury, the CDHR boss directed his team to leave the frontage of the Lagos house, refusing to be addressed by the Secretary to the State Government Mr. Tunji Bello.

Comrade Debo Adeniran the executive chairman of CACOL,  however took a swipe on the Minister for Works, Power and Housing, Mr. Babatunde Fashola noting that he has been merely playing pranks with handling of the affairs of the important ministries in his kitty.

“A hike in the tariff electricity has been imposed on Nigerians for services not rendered to them. This is flagrant and audacious corruption in a situation where the government is pontificating that it is against corruption and illegality”.

“Mr. Babatunde Fashola, should be told that the Ministry he superintends over is not meant for the kind of antics that he got away with in Lagos state,this is Nigeria, this is National and it is hugely above the microcosm that he evolved from.”

“We make bold to say with every sense of responsibility that it’s the PHCN, the DISCOs, NERC that owe Nigerians money and apologies for not rendering services that they received money for, albeit, forcefully”.
He lament deart of desired change promised by the All Progressive Congress APC.

“Nigerian masses are enjoined to rise and resist the demonic and justifiable hike in electricity tariffs. We must move against the ‘change’ we did not vote for, to protect our being, and the struggle for a humane society”. Debo averred.

The ASUU team from the South West stated that the union which stands for justice would not be part of any form of corruption.

Benin City agog as Night of Bliss holds this week