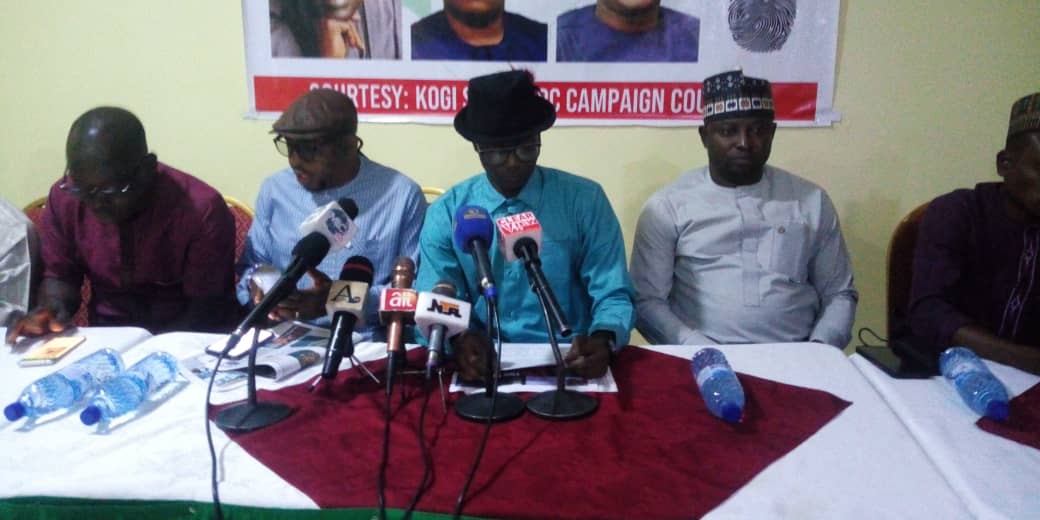 The All Progressive Congress (APC) Campaign Council in Kogi State (KOSACC) may gave developed panic over the unexpected huge crowd at the Peoples Democratic Party (PDP) campaign in the state, alleging that the PDP hired supporters from the seven neighbouring states for its campaign rally last Saturday in Kogi State.

The Director of Media and Publicity of the KOSACC, Kingsley Fanwo, at a news conference on Monday in Lokoja, speaking  on the “The Many Lies of PDP and its Traditional Illusions in Kogi State”, emphasised that the PDP was dismayed by the poor turnout at the rally. He said that PDP resorted to theatrics of rolling out expired individuals who had been expunged from the ranks of the APC for their unsavory deeds and characters as defectors and proceeded to canonise them.

According to the APC, “The rally turned into a farce when people like the former Deputy Governor of the state, Elder Simeon Achuba, and the former speaker of the state assembly, Rt Hon. Alfa Imam, were repackaged for Atiku as Kogi APC stalwarts who were decamping to the PDP at the rally.

“What Atiku and his entourage might not have known is that this is the same Achuba who was impeached from office by the state assembly for gross misconduct during the first term of the administration.

“Also, Rt Hon. Alfa Imam is another has-been, who has a running battle with his colleagues when he was Speaker of the State House of Assembly. At the cusp of being impeached, he pleaded to be allowed to resign.”

The Media and Publicity  Director  stated that the duo were no longer active members of the party and the APC won the 2019 landslide without them.

He stressed that the PDP campaign rally in Kogi was a shadow of itself, saying the umbrella circus did not need anyone to tell them that Kogi people have rejected them.

Fanwo stressed that it was painfully obvious that the former ruling party had been fittingly reduced to a shadow of itself in Kogi over the last seven years.

“We know that PDP brought a lot of people from seven neighbouring states for the campaign rally in Kogi.

“Talking about 148,000 defectors at Kogi rally by PDP is too ridiculous and not true.” Fanwo said.

Fanwo, the Commissioner for Information and Communication Strategy in Kogi State, said there was no doubt that the Yahaya Bello led APC administration had changed the face of Kogi.

According to him, “The legacy projects executed, some of which were recently commissioned by Mr President, are too numerous to mention here.”

Fanwo also said that the pledge of Atiku to revive the Ajaokuta Steel Company could only be classified as a ‘morbid joke’, which he must have made to insult the sensibilities of Kogi State and her people.

“President Muhammadu Buhari has taken a bold step on the gigantic project and we trust the President in Waiting, Asiwaju Bola Ahmed Tinubu to see the process through.

“The PDP flag bearer also assured the lecture theater crowd culled for him from seven states that he would win the 2023 Presidential polls. This is the illusion of the decade already, as he will be resoundingly defeated by the Presidential Candidate of the All Progressives Congress.

“We are on course to deliver Kogi State massively for the All Progressives Congress and maintain the legacy of the party in the state under the leadership of Governor Yahaya Bello.

“We urge our members to remain peaceful, law abiding and continue to work hard to ensure that we set a record with our numbers in the February and March polls,” he declared.

The Peoples Democratic Party (PDP) Presidential Campaign Council (PCC), Head of Media and Publicity, Austin Ochum, described the allegations of APC as the noise of a drowning party.

Ochu said, “the insinuation that we hired people from seven states is very strange and laughable because we have never for once engaged in such a merchandise.

“By that press conference, APC is definitely threatened and jittery that the game is over for them as the people spoke last Saturday that they desperately want change. And the time for that change is now.

“Traditionally, Kogi is a PDP State, we only faulted along the way but thank God we have gone back to the trenches and ready to make amend and take over the state this time around for the interest and good of our people.
“In fact, that is exactly what APC and are now going out flabbing around not knowing what to do as the difference and message is now very clear that the game is over,” he said.