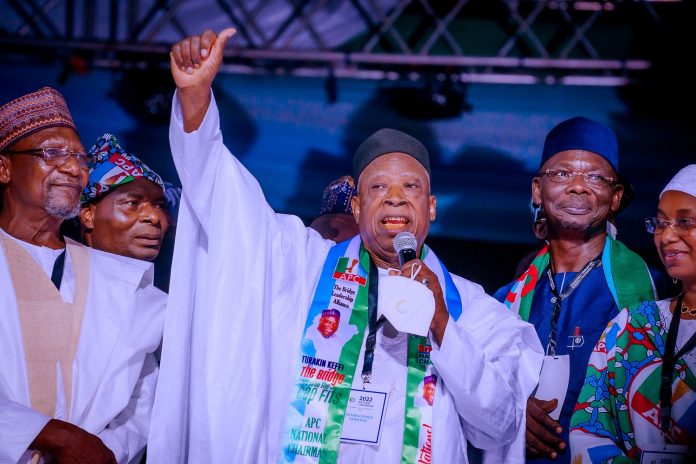 A national vice chairman of the APC has fired off a letter to the national chairman for delaying the screening of the party’s presidential aspirants, warning Abdullahi Adamu of lapsing into past errors.

Lukman Salihu, who was the Progressive Governors Forum D-G before he became vice chairman, is known for his boldness in speaking up against his higher-ups.

Adamu has shifted the party screening and election three times now, the latest being June 6, 7 and 8, 2022. Salihu insisted the decision was personal as Adamu didn’t carry members of the National Working Committee along.

Many believe he is buying time to allow the Aso Rock cabal and their candidate, former President Goodluck Jonathan, to settle down in the APC, and emerge as a consensus candidate.

In his letter dated May 27, 2022 and addressed to Adamu, with the title, “Rebuilding APC: Need for new initiatives,” Salihu alleged situations whe decisions were taken and left unimplemented and members not carried along in the scheme of things.

“Under your leadership, the current NWC is gradually snowballing into similar circumstances whereby decisions are taken and allowed to lay bare and, in some instances, changed without necessarily taking needed steps to carry members along.

“Presidential aspirants are yet to be screened. The official explanation is that you are awaiting final consultation with President Buhari. At the risk of sounding agitated, this is unfair to President Buhari because to the best of my understanding it is an attempt to use the President’s name to give excuses for failure.

“I find it necessary to send this letter to further appeal to you to review our approaches under the current National Working Committee (NWC) under your leadership. It is now two months since we came into office and you have so far raised a lot of expectations given that some of the problems, which undermined the support base of previous leadership, would appear to have been minimised.

“For instance, meetings of the NWC are now held almost every week. Members participate actively and where necessary engage and contest issues. It is to your credit that you accept the positions of members even when you disagree. This is a remarkable departure from what was obtained in the past where the National Chairman conduct meetings of party organs as Chief Executive and to that extent, therefore, exercises prerogatives and overrules members.

“Under your leadership, the current NWC is gradually snowballing into similar circumstances whereby decisions taken are allowed to lay bare and, in some instances, changed without necessarily taking needed steps to carry members along.

“No doubt, given all the challenges inherited and coming at a time when it’s extremely difficult to control events and almost everything would appear to have been set against the party and its leadership, we need to take every measure to avoid past pitfalls.”