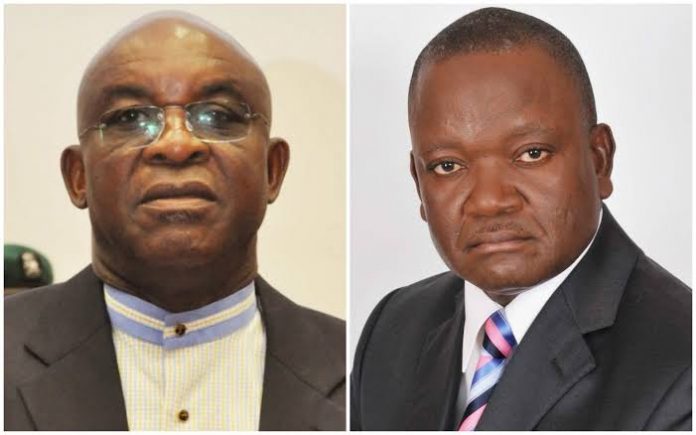 The leadership pendulum in Benue State peoples Democratic Party, PDP, swings to the power bloc of the returnee Governor of Benue State, Samuel Ortom. Accordingly, former President of the Senate, David Mark, former Benue State Governor, Gabriel Suswam, have voluntarily conceded PDP leadership in the state to Ortom in the preparations for the 2019 general elections in the state.

David Mark at PDP stakeholders meeting in Makurdi formal handed over of the PDP structures to Governor Samuel Ortom as leader of the party in Benue which was earlier declared by PDP National Chairman, Prince Uche Secondus, at the time Ortom defected from the All Progressives Congress, APC, to the PDP. .

Mark, remarking that the stakeholders meeting was the first of the harmonised PDP since Ortom returned, noted that with the calibre of the people that had come back to PDP’s fold, it could win any election in the country.

The senator assured that the old and new members of the party all have equal rights in the party, explaining that it was on that basis the equality that the executive positions had to be reviewed so as to accommodate the people that just defected to PDP.

Mark had declared: “As they joined us, we need to give them some positions, thereby, giving them a sense of belonging.

”We have constituted an Integration Committee which will work 24/7 to ensure proper harmonisation right from the council ward upwards.”

Former Governor Gabriel Suswam declared that the decision to cede the leadership of the PDP to Ortom was arrived at for the best interest of the state. He maintained that the party was considering the future; appealing that all affected should accept the decision in good faith.

Suswam had assured PDP members that the officers whose offices were affected by the review would be offered immediate appointment by the state government.

Governor Ortom assured that all the PDP leaders in the state would continue to work together and the cohesion would be sustained. The governor stated:”Our coming together was for the interest of the state and that was what brought them together.

Ortom promised other PDP governorship aspirants not to be perturbed, assuring that he would not compromise PDP rules and constitution as leader of the party. ”There will be a level playing field for all the aspirants,” he declared.