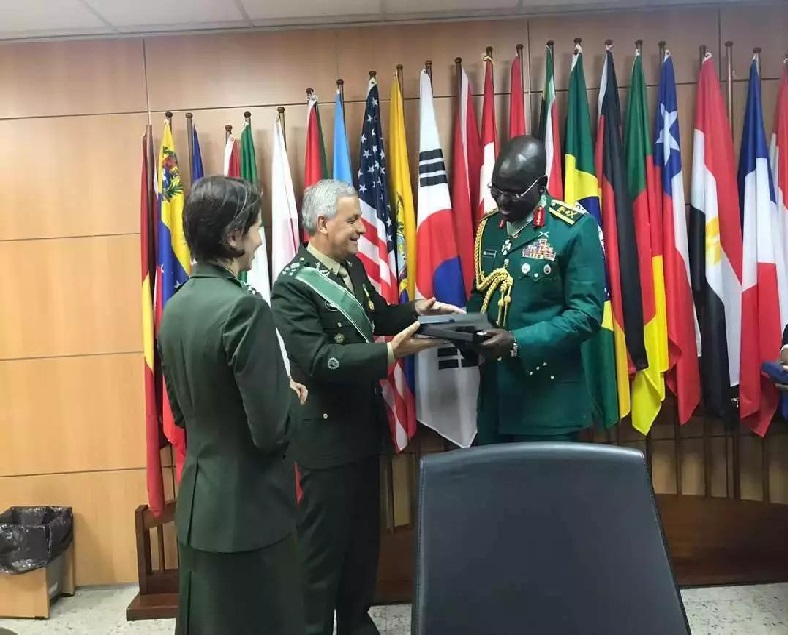 The Chief of Army Staff, Lt.-Gen. Tukur Buratai has been conferred with the Brazilian Military Order of Merit Award at Brasilia in Brazil.

The Brazilian military order of merit award, which is the highest military honour in the country, is awarded to military officers, who had distinguished themselves in various military endeavours.

According to a statement issued by Brig.-Gen. Sani Usman, the Director of Army Public Relations in Abuja on Wednesday, the prestigious award was approved by President Michel Temer of Brazil.

Usman said the approval was based on the recommendation of the Brazilian Army Commander, Gen. Eduardo Villas-Boas.

According to the citation at the occasion, the award was in recognition of Buratai’s exemplary and world’s recognised leadership qualities and the Nigerian Army’s effort in the fight against terrorism and insurgency.

“He is one of the few foreign dignitaries to be so honoured with such an award by the country,’’ the army spokesman said.

In his vote of thanks, Buratai expressed appreciation for the award.

He said the honour was not only to himself but to the entire officers and soldiers of the Nigerian army and indeed, Nigeria.

“I had never imagined that I was going to be given such recognition when I was planning to visit the Brazilian Army.

“It is no doubt a great honour to me, the Nigerian army and the Federal Republic of Nigeria, to be bestowed with the Brazilian military order of merit, which is the highest and most prestigious award in the Brazilian army,’’ he said.

He said the award was a clear manifestation of the long-standing relationship between Brazil and Nigeria, which also portrayed the recognition of Nigerian army’s effort in the ongoing counter-insurgency operations in Nigeria.

The army chief thanked the government and people of Brazil, as well as the commander of the Brazilian army and his staff for finding him worthy of such award.

Share this on WhatsApp
Related Topics:Brazilian Military Order of Merit AwardChief of Army StaffLt Gen Tukur Buratai
Up Next

Disquiets over Buhari’s absence from FEC meeting a third time