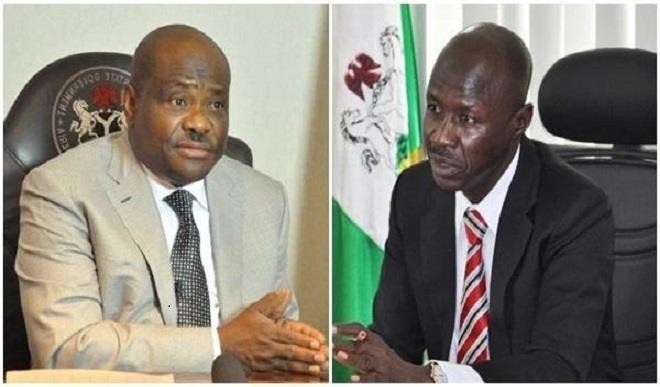 President Muhammadu Buhari and the ruling All Progressives Congress (APC) may have set out to unsettle Governor Nyesom Wike of Rivers State. The party government may have deployed the Economic and Financial Crimes Commission (EFCC) to carry out operations in Rivers State under the guise of fighting corruption. Accordingly, the EFCC disclosed that the commission is set to investigate some officials of the Rivers State government.

EFCC Chairman, Ibrahim Magu, on a working visit to the south-south zonal office in Port Harcourt, Rivers State, revealed that the commission was preparing to launch investigations into the accounts of Rivers State Government

Report indicated that the EFCC is embarking on this assignment in the storm of a controversial court judgment restraining the commission from investigating the state government.

The EFCC Chairman, Ibrahim Magu, was said to have declared that Rivers State records the highest number of corruption cases in Nigeria, adding that it is second to Lagos State due to its prominence in the oil and gas sector.

However, stakeholders in the state argued that the action is one of the plots to silence opposition in the country, adding that Governor Wike has been a strong critic of the Buhari administration and the APC government.