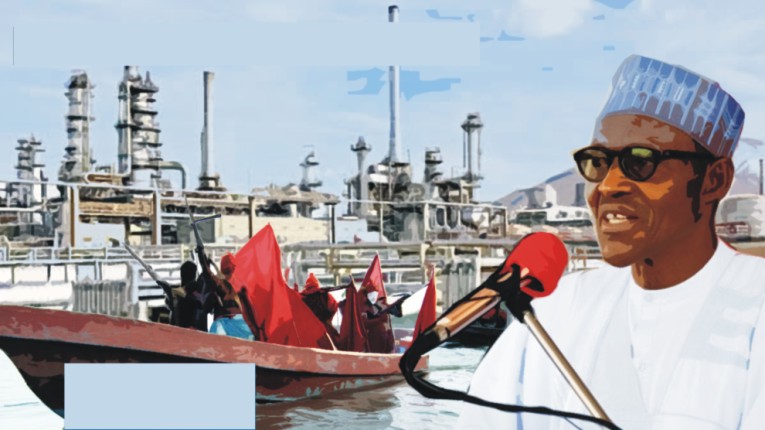 THE manner our governments have handled challenges in several sectors of our national life particularly internal security (Fulani herdsmen mayhem, kidnapping) and issues of perceived sabotage in the nation’s oil and gas sector, gives the impression (whether wrong or right) that our leaders derive joy in making miscreants and outright criminals Nollywood superstars and this rather than address the issues only worsens the pathetic situation this nation has been made to face.

It was in Beijing during his recent working visit that President Mohammadu Buhari told members of the Nigerian community that: “The government is still being dared, but those who are sensible should have learnt a lesson. Those who are mad, let them continue in their madness. I am aware that in the last two weeks, the national grid collapsed a number of times. I hope this message will reach the vandals and saboteurs who are blowing up pipelines and installations. We will deal with them the way we dealt with Boko Haram.”

“We would have to deploy even sophisticated weapons to ensure we contain the vandalism, overhaul security and permanent pipeline security force might also be an option to look at. We are not able to produce as much as we ought to. About 250,000 barrels are lost per day. We are losing large sums of money daily. We look for alternatives while we look forward to repairing the pipelines.”

The Vice President also said vandalism was also affecting gas supply to the country’s power stations. His words: “The damage done has led to low supply of natural gas and most of the power plants are not functioning to maximum capacity. We went to Forcados to see for ourselves the sabotage done to our pipelines. We have seen the alternative steps that the NNPC is taking in order to ameliorate the damage that has been done and the problem associated with getting gas from that terminal to all of our plants.”

First, whose responsibility is it to protect these crucial infrastructures? The primary responsibility of government is to protect lives and properties, and if the oil industry, which is the most vital in Nigeria of today despite all the noise about oil now being useless, cannot be protected except through Boko Haram method, can our government (both past and present) say they have done well in living up to that responsibility?
If the breaking of oil pipelines has continued unabated, does that not mean the Federal Government is incompetent in providing security to those crucial infrastructures or that people in government and the security agencies are directly involved in the racket and so do everything possible to make sure government doesn’t succeed in addressing the problem?

To God be the glory we now have a president that has ideas of what should be done to tackle some of the lingering security challenges facing us a nation. President Buhari should actually, as the first step, ask questions on why after more than 20 years, the special security Joint Task Force Operation Pulo Shield, that has been operating in Niger Delta has not been able to end pipeline vandalism and crude oil theft or to even reduce it to inconsequential level. Something is not adding up in this whole thing!

Does anyone in government pretend that this awkward phenomenon of oil pipeline vandalisation in Nigeria is peculiar to the Niger Delta? As we have come to see in our recent past, it can be boldly stated that we have had more cases of pipeline breaches at Arepo, Ogun State, Atlas Cove in Lagos and other points on the Lagos/Mosimi-Northern pipeline system than recorded cases in the Niger Delta though these are product lines.
We also have array of reported cases of breaches between Auchi through Okene (Kogi) to as far as FCT in the Abaji area. Ofcourse, before NNPC decide to discontinue sending petroleum products from Port Harcourt through Aba, Enugu to Makurdi and even Yola, the rate in the south-eastern parts of the country was unmatched by any region though also, breaches in this part were mainly on products line of the NNPC System 2E Route compared to breaches on crude oil pipelines in the delta region.

Has someone ever bothered to ask how governments and people of other oil producing countries (both members and non-members of OPEC) protect their flowlines? Is Nigeria the only oil producing country were vandals attack oil pipeline either as sabotage or with outright criminal intent of stealing from it? How come that our own pipelines are so accessible and vulnerable to damage?

Contrary to what people in power would want to us believe that this problem of pipeline vandalism is a straightforward security, those who know would agree that the problem is more complex than just Niger Delta people blowing up lines either to steal crude or in protest of marginalisation (whatever that means). As a nation, we need to do serious thinking devoid of unnecessary politicking into the origin, sustenance and even improvement of the crime, and not just express anger or blanket condemnation of an entire region.

Not too long ago, we were told that crude oil stolen from Nigeria were being loaded and from a Ghanaian oil facility- The Saltpond Oil Platform, as if produced there and then taken to Italian refineries amongst others to process. The Economic and Financial Crimes Commission (EFCC) under Ibrahim Lamorde was implicated in the scam? How was the case handled by our government, has it not been forgotten? How come the Ghanaian Saltpond platform has been running its fake operations on feedstock of stolen crude from Nigeria for years without our navy, the JTF and other security agencies not cracking the network for until dispute between mafia families or rather international criminal syndicates in Italy that exposed the racket?

If really we are serious as a nation, we should actually sit down and see that vandalisation of crude oil pipelines in the Niger Delta may entirely not be by those we referred to as Niger Militants. Some of the so-called vandals, especially the technically savvy ones are possibly embedded in the petroleum sector, rather than in the oil producing communities.

The last major incident of crude oil pipeline breaching in the Forcados area was an underwater explosion which was an innovation or rather sophistication to what was common in the region before now. Where in the Niger Delta do militants have the capability to cause underwater (subsea or even swamp) explosion? You see, anger and emotions are simply making our leaders look at a complex matter as straightforward disgruntled oil producing community issue.

Concerning breaching of natural gas supply pipelines to the gas-fired power stations, it is equally not out of the way that selfish interest group may be undermining government’s effort in the power sector. We have to look the way of people ofcourse rightly labelled saboteurs by our president, who may be hell-bent on thwarting whatever efforts government is putting to enable this nation achieve a sustainable power generation and supply situation. This may not have anything to do with Niger Delta agitation though few miscreants can be recruited to carry out the dastardly acts for the business interests of people in the sector.

Curiously, a hitherto unknown group, “The Niger Delta Avengers” whether real or imaginary has openly dared President Buhari, telling him: “you can’t stop us.” This same group equally claimed responsibility for the underwater breaching of the trunkline in the Forcados area. Question: Who are these people, are they indigenes of Niger Delta or people from outside the region or even expatriates?

Severally it has been posited that it’s impossible for youths of the region to steal crude oil and load into vessels (whether large or small) at the level the government has been trumpeting without foreign input and collaboration with officials of those companies that produce the oil; top naval officials; and officers of the JTF.

We should actually find out what has happened to the intelligence gathering abilities of the various arms of our security apparatuses. How come nobody has been able to definitely identify the key actors, middlemen and local collaborators in these nefarious acts? This is surprising walahi! This is another area our president should look at because no effort would work if it is being undermined from inside. God bless Nigeria!!

Killings in parts of Nigeria: Mr President, our country is under attack